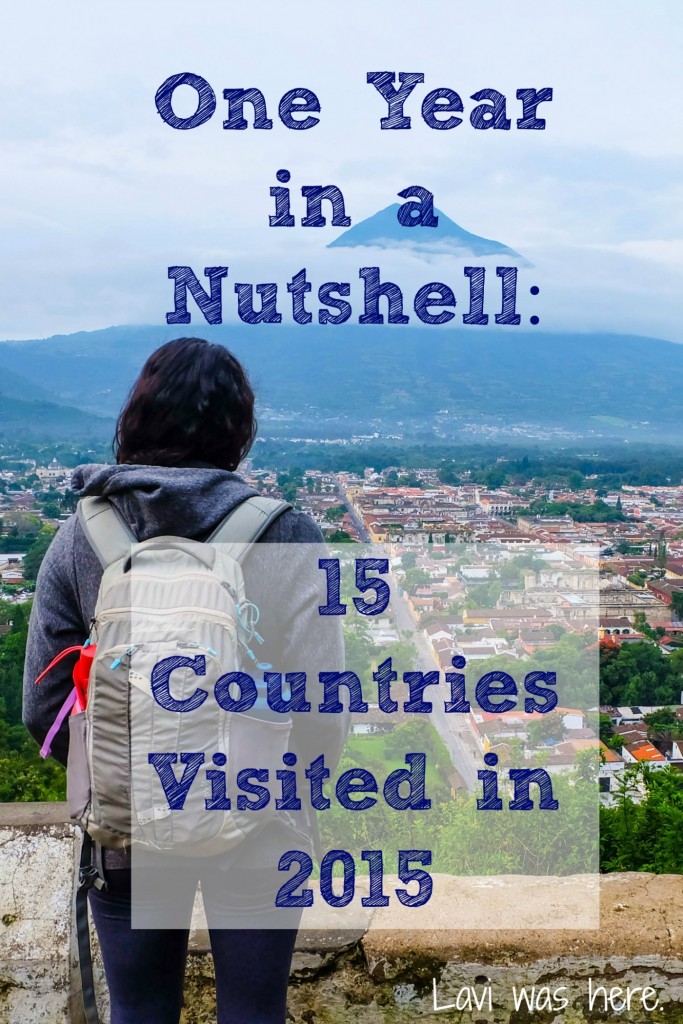 2015 has been one of my best and favorite years of travel yet and my first full year of not living in the U.S. My travels and life this year have been such whirlwind of a crazy and exciting experience that I will never forget.

I’m feeling nostalgic, so I thought I’d look back on some of my favorite moments and photos from the 15 countries I visited in 2015. Maybe you’ve seen some of these before, but they’re the best of the best!

I rang in the New Year in Brussels with one of my most fun travel buddies, Alicia. It was cold and a bit rainy, but we celebrated the new year at a friend’s apartment, eating 12 grapes at midnight like the Spanish do and playing games and dancing until wee hours of the morning. And somehow I don’t have a photo of any of this! It was the end of a two-week trip through parts of Eastern Europe (plus Belgium) and the beginning of one of my most exciting years yet.

Although technically I was living in Spain at the time, I still think it counts as a country visited because I saw SO MUCH of the country this year. From pouring sidra in Asturias to walking on sand dunes in Gran Canaria, I loved every minute I explored Spain this year and I miss my life there so much. My favorite places in Spain that I visited this year were definitely Barcelona and San Sebastian. Both amazing and unique in their own way, I was most excited to visit these cities in Spain and they proved to live up to the hype!

Edinburgh was the first and only native English-speaking country I visited while living in Spain, which made it special and kind of weird to experience after spending months in Madrid. It was blustery, cold, and literally nearly blew me away when I walked up to Arthur’s Seat. The architecture was straight out of Harry Potter and it was a lot of fun to catch up with some traveler friends living there at the time.

By far my favorite trip while living in Spain, Morocco was just incredible. I loved the food and culture; I met incredible people and saw awe-inspiring places like Chefchaouen and the Sahara Desert. And I surfed for the first time! I loved how different Morocco was from my immediate surroundings in Spain but still had similar aspects to my Indian culture. Would I go back? In a heartbeat.

My first and only glimpse of Eastern Europe during the spring, Budapest was gorgeous and so much fun. It was the first time in a long time that I went on a trip alone and it felt so good to travel independently again. Visiting Budapest’s thermal baths was certainly and interesting experience, though it kind of grossed me out at the same time!

All I can say is, YUM. The food in Italy really might be some of the best. I visited Rome the previous autumn, but Florence in summer was exactly what you’d expect it to be. It was crowded, colorful and gorgeous. I went on a tour of Tuscany and had some of the best food and wine I’ve ever tasted. My stomach still growls every time I think of that meal.

I fulfilled my dream of visiting the Azure Window in Malta. It was such a stunning country that I enjoyed exploring by scooter for a few days in summer. It was my last trip to another country before returning to the U.S. from Spain and it was an amazing feeling to finally see an exotic place that seemed just too good to be true with my very own eyes.

I began my Central America trip in the Yucatán Peninsula of Mexico. I ate copious amounts of tacos and visited many Mayan ruins. The locals were so friendly and nice and I was so happy that my time in the Yucatán made me realize that there are many misconceptions about Mexico that were tainting my view of the country.

I’m not going to lie: I didn’t love Belize. Caye Caulker was a picturesque little island, but I found Belize to be wildly overpriced and not really that interesting in comparison to the other countries in Central America. My big regret is not snorkeling at the coral reef there, but I kind of doubt I’ll ever return to do that, but I’m still glad I satisfied my curiosity with Belize.

Although it was only a few months ago, I feel like the month I spent in Guatemala was ages ago! I spent a lot of time outdoors in Guatemala, hiking volcanoes left and right, including Volcán Acatenango, which was a personal struggle and feat I still can’t believe I achieved. I loved camping in Tikal although I woke up in the middle of the night thinking someone was going to break into my tent. The sunrise on Lake Atitlán also wasn’t too shabby. I mean, just look at it:

My one week stint in El Salvador was enough for me to check out a little bit of the Ruta de Flores in Juayúa, San Salvador, and El Cuco. While I enjoyed Juayúa and El Cuco, I did not particularly care for San Salvador. I saw the Pacific Ocean for the first time in years in El Cuco! The sunsets were out of this world, definitely some of the best I’ve seen on the entire trip.

Saying I loved Nicaragua would be an understatement. Not only did I fully enjoy almost every second I spent in Nicaragua, but also I loved the person I was there. I rediscovered the solo traveler inside me after going separate ways with a travel partner and met so many interesting and incredible people along the way that I continued to bump into as I made my way south. Everything I did in Nicaragua was fun: Volcano boarding down Cerro Negro, bicycling around Isla de Ometepe, surfing and volunteering in San Juan del Sur – there are so many things about this country that made it hard to leave. That makes me even more certain I’ll be back one day.

As a whole, Costa Rica was an adrenaline rush. I went zip lining in Monteverde, hiked to a waterfall with my traveling and blogging soul sister, Steph from My Quarter Life Epiphany in Montezuma, and waterfall rappelling and surfing in Jacó. If Costa Rica wasn’t so expensive, I might have never left!

My last country in Central America, I was hoping I’d be able to get in some last-minute beach time and hiking in Panama. Unfortunately, it rained almost the entire time I was in Bocas del Toro! It was really unfortunate because I was having so much fun reuniting with some of my travel buddies from earlier trips and was hoping we’d be able to explore the nearby islands. Panama City was like stepping straight into the U.S. – it was so built up and modern! My favorite part was walking around the old town, Casco Viejo. I spent my last evening in Central America chatting with various locals in Casco Viejo. It was a exactly how I wanted to end my four-month journey through Central America.

I flew into Medellín, Colombia on last week on Christmas morning and have been having a blast catching up with friends I met earlier on my trip through Central America. I’m so excited to ring in the new year here in South America and eventually continue my journey south!

2015 shaped up to be pretty damn amazing. I visited 15 countries this year spanning Europe, Africa, North America and South America. I finished out the year without having to experiencing the cold of winter. Though I’ve lost a few cell phones along the way, nothing inherently bad happened to me this year while traveling. I’m lucky. I’m happy. I’ll be spending the next few months at least traveling through South America. I can’t wait to see what 2016 has in store for me.