Bogotá’s street art scene has really blossomed over the past few years, rivaling the scene in other notable cities like Berlin, London, and Prague. I’m a big fan of walking tours as a way to get to know a city, so I joined on the Bogotá Graffiti Tour to check out the art around the historic La Candelaria district. It was a fun way to spend a day, and it was free! 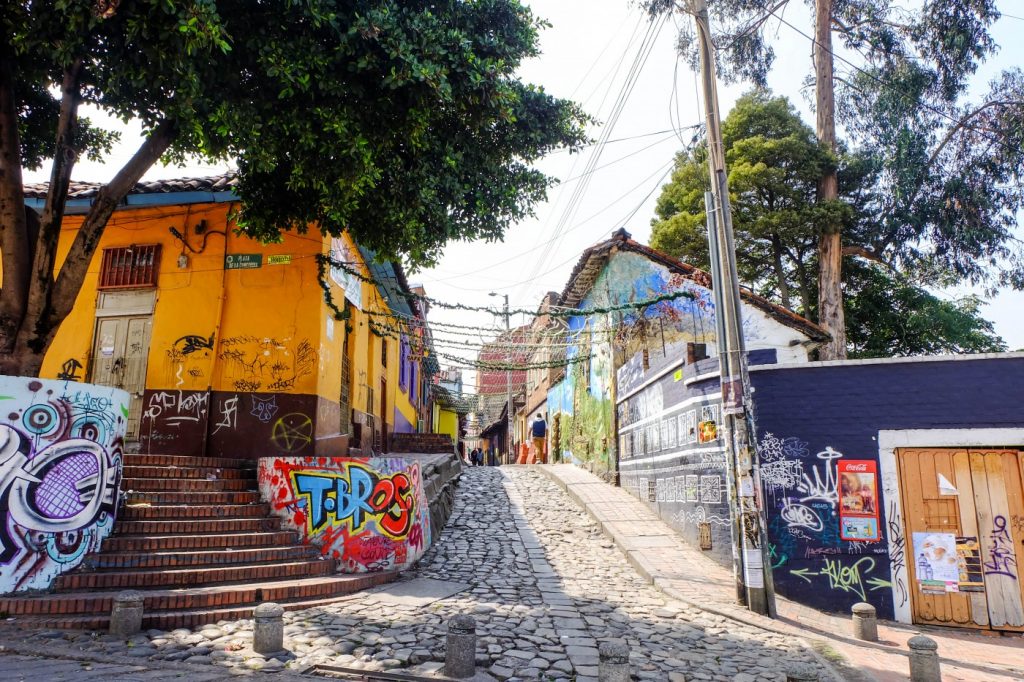 Our knowledgable guide herded a large group of us through the streets of La Candelaria, the historic district of Bogotá. Street art was on every corner. Even when we didn’t think we were looking at art. It was really fun to learn about the different styles of the street artists, their trademarks, and we even caught one female artist in action as she planned out her next mural. 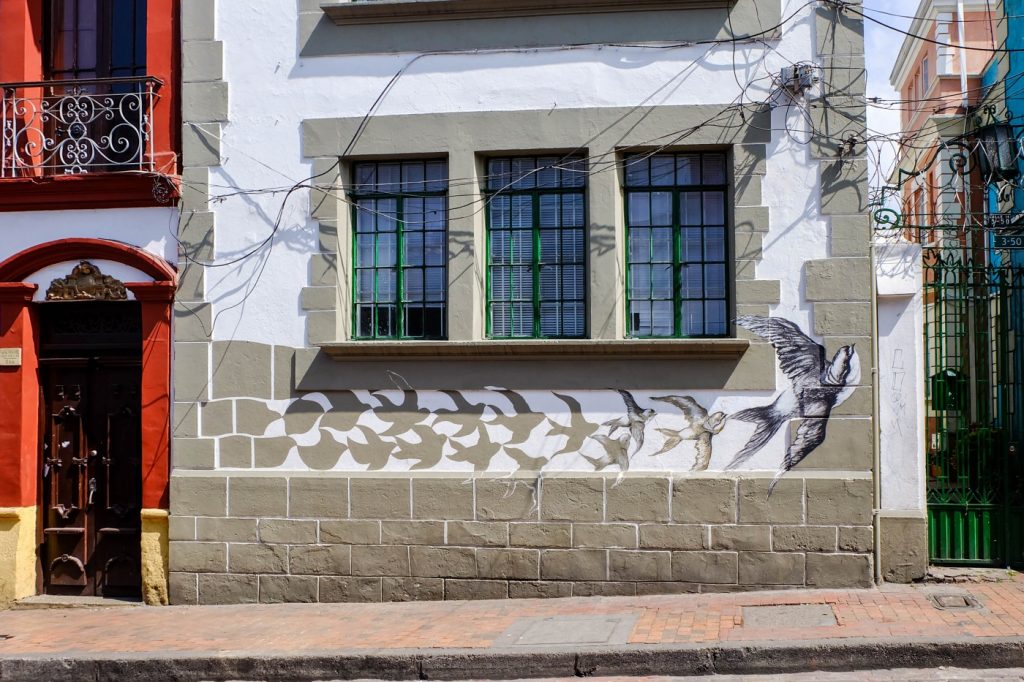 Graffiti art isn’t about defacing buildings anymore like it might have been in the past. Artists now create visuals to shed light on political and social issues, initiate a conversation, and trigger change in the community. Street art often expresses what others don’t want to say out loud. We saw many works depicting the violence and corruption the Colombia as been subject to over many years. 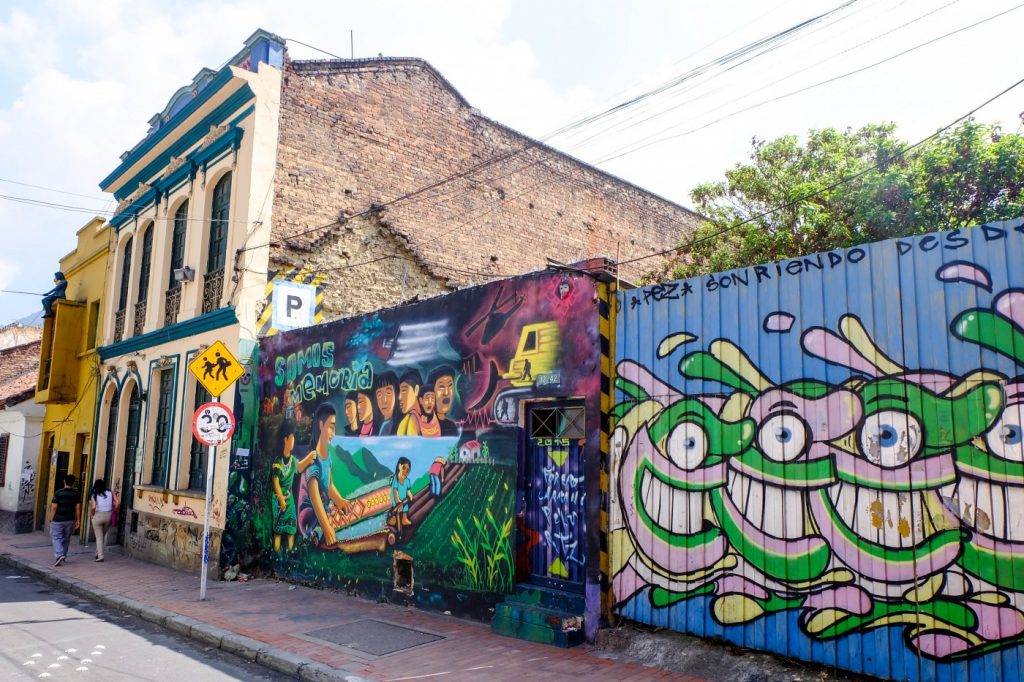 The work of Barcelona native Pez (above left), which is Spanish for fish, were all over Bogotá. Those smiling faces kind of freak me out, but they’re everywhere! 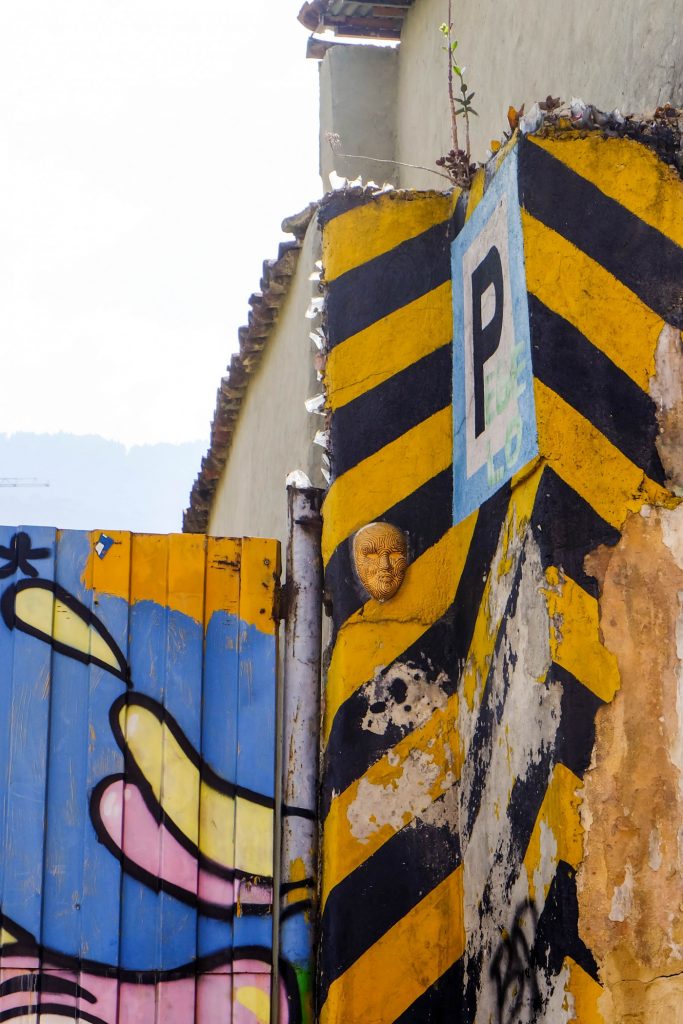 Do you see what I see? Some of my favorite pieces around Bogotá were less obvious and hidden in plain sight. I really liked looking for Australian street artist Crisp’s masks all over La Candelaria. We came across various pieces of his including murals, not only masks. Many artists like Crisp relocate to Bogotá because of the active street art scene. 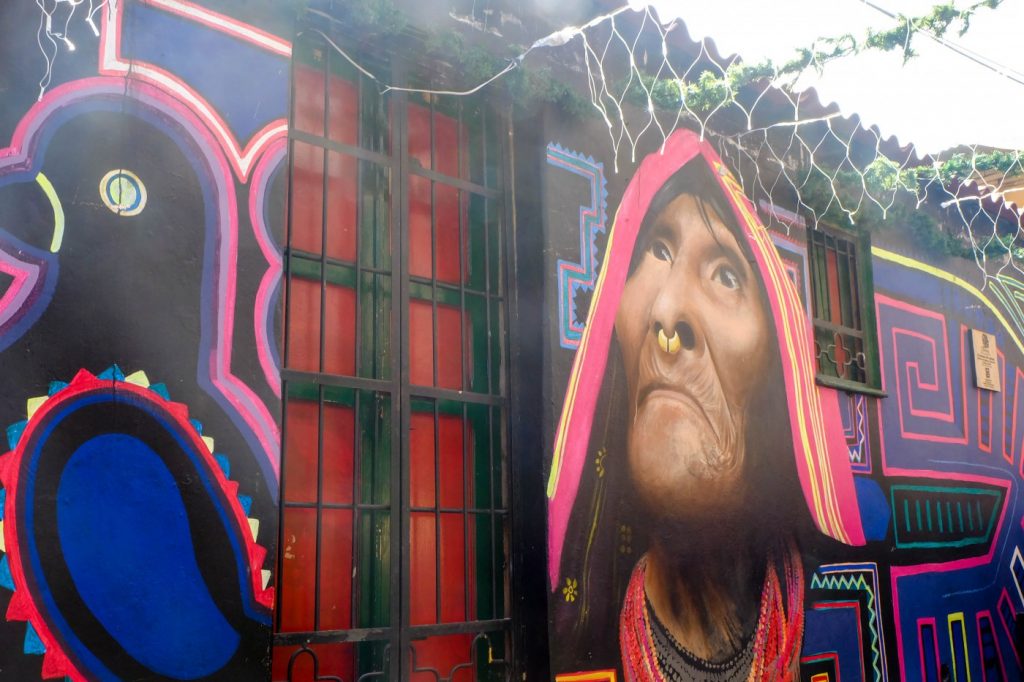 Guache’s murals of Colombian indigenous people are so vibrant. I loved the mural above; it reminded me of the beautiful indigenous women I came into contact with in Central and South America. Some more realistic than others, Guache’s work was definitely one of the most eye-catching to me. 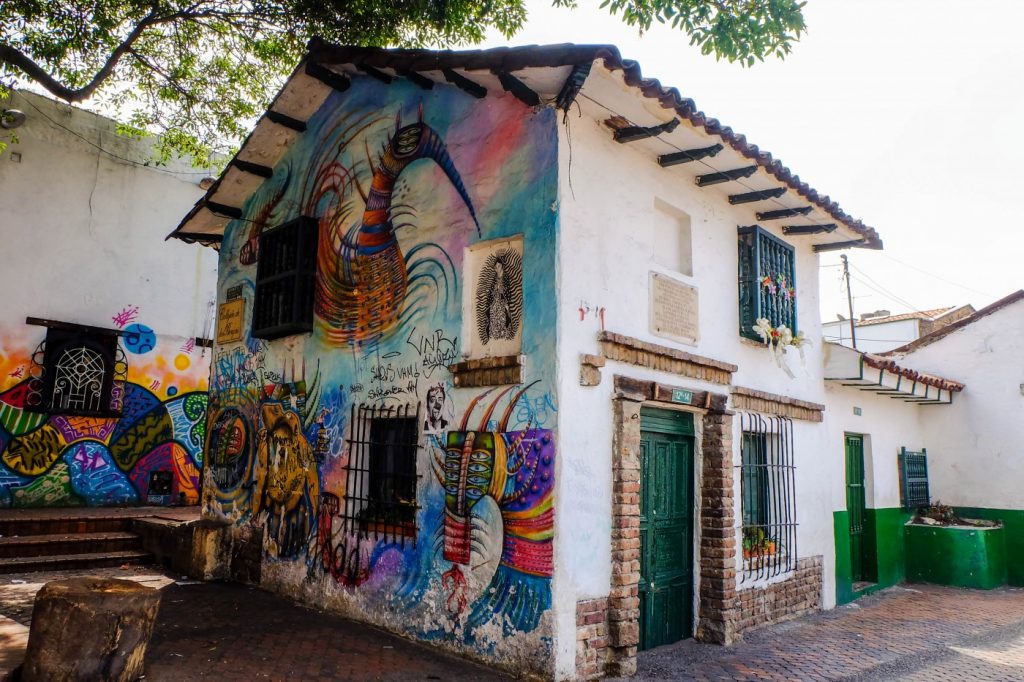 With the trademark of multiple eyes, it was easy to spot the work of Rodez and his two sons, Malegría and Nomada. The building above is one of the oldest buildings in Bogotá. 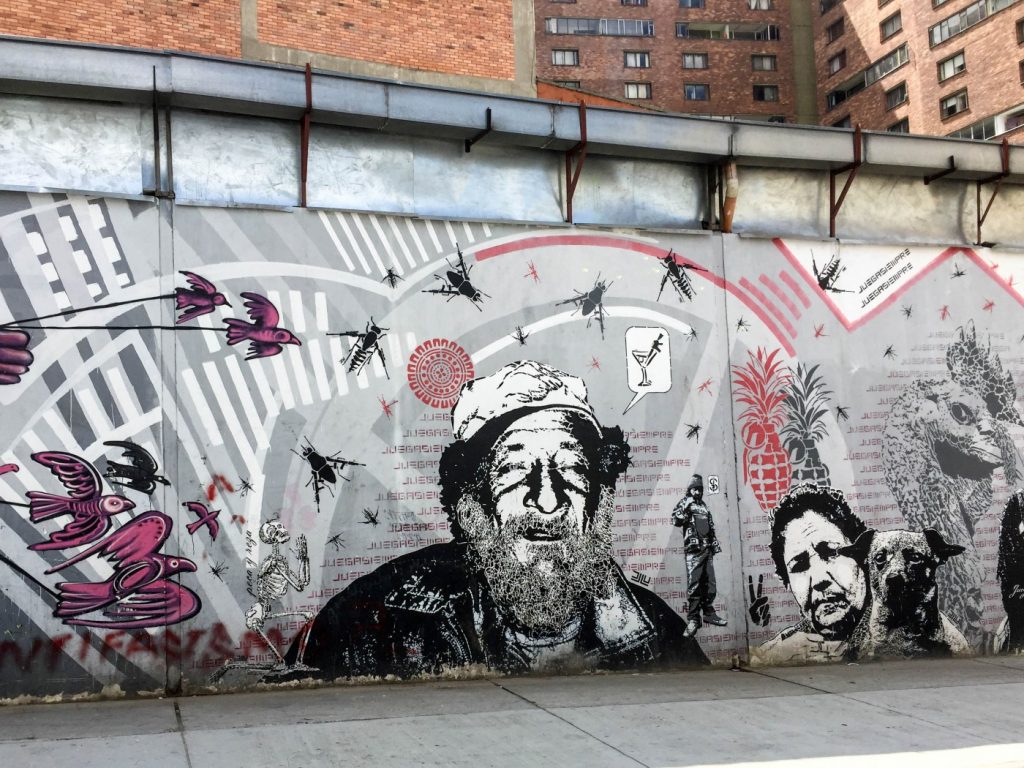 More than just artistic expression, street art invokes thought. Look closely and you’ll see the legs of those insects are guns. DJ Lu’s murals are usually aimed at political issues in a beautiful and thought-provoking way. This is what I love most about street art. It’s more than just an image and the message is much deeper than you think. 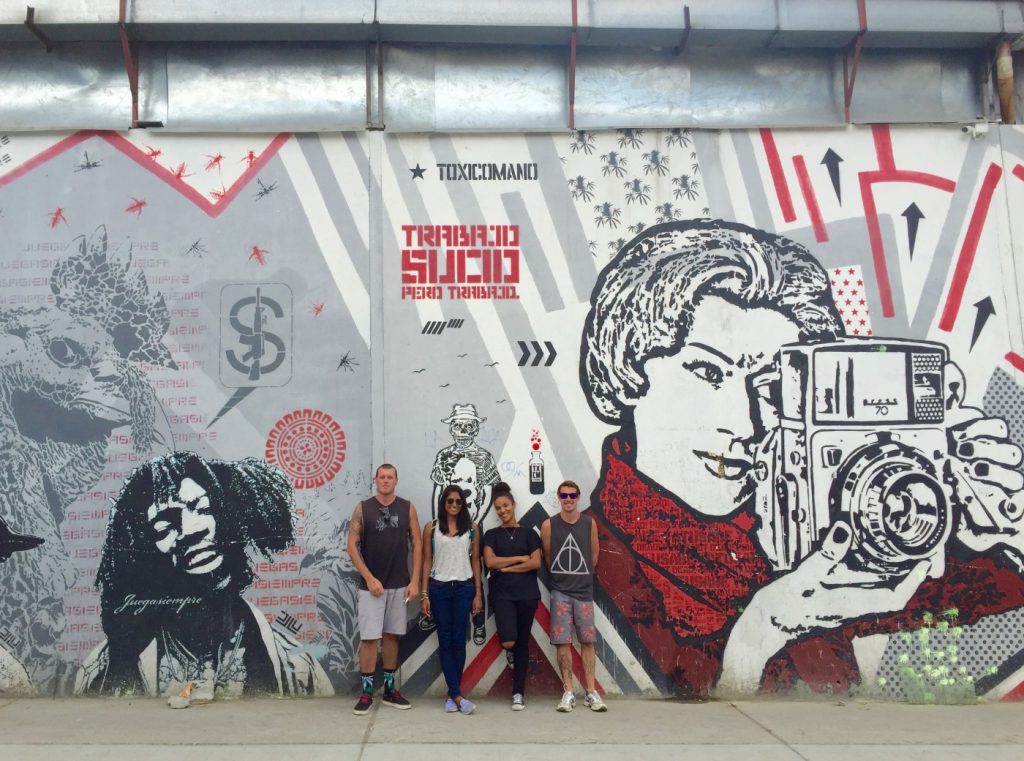 We ended our tour in front of stencils by Toxicómano. The message above our heads reads, “dirty work, but work”. Many of the pieces by Toxicómano mock mass media and are very forward with the message they want to convey. 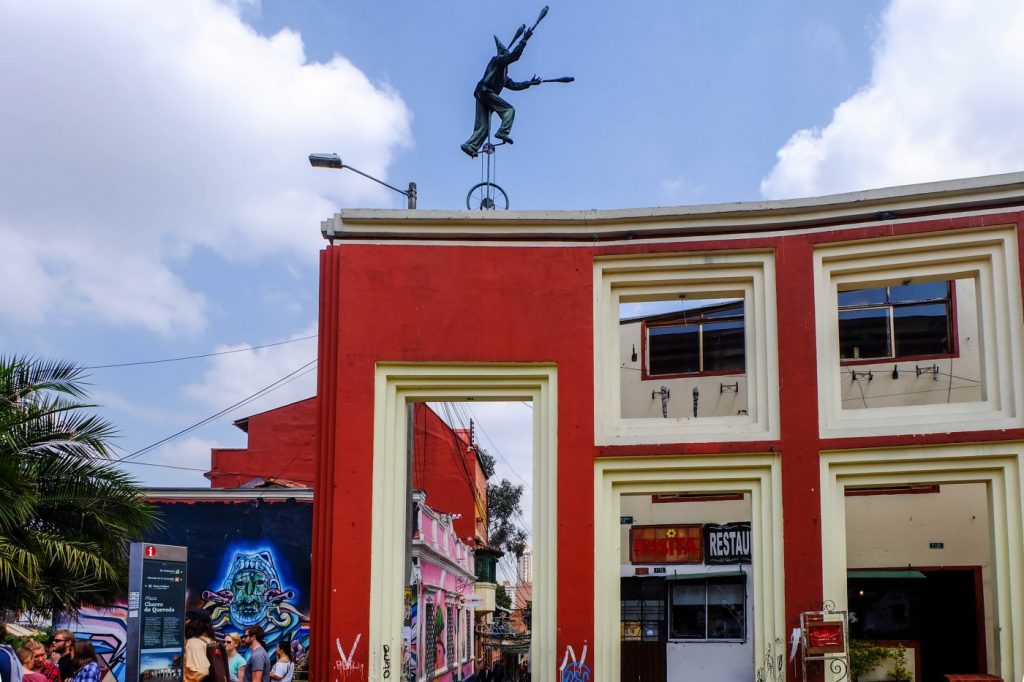 I really loved the  sculptures that were scattered around the ledges of buildings in La Candelaria. The man on the unicycle above was the cutest! 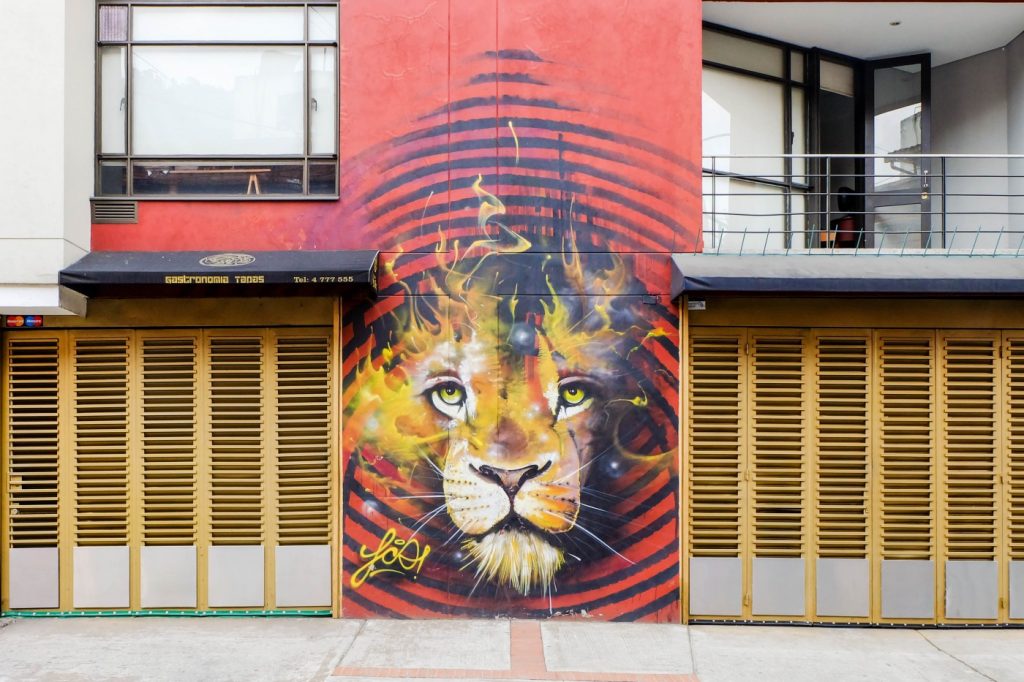 From stencils to sculptures and murals, there are so many different ways to create art and send a message. There’s a certain code to abide by on the street. Unlike the mural I painted in my middle school in 8th grade that was painted over just months later (it was terrible), you can’t simply just paint over someone else’s artwork and put up something new. If not followed, you could be blacklisted from the community. Graffiti is decriminalized in Bogotá though some areas are graffiti-free. Even without permission, building owners don’t seem to mind if their walls are covered with street art. In fact, some even welcome and commission it. 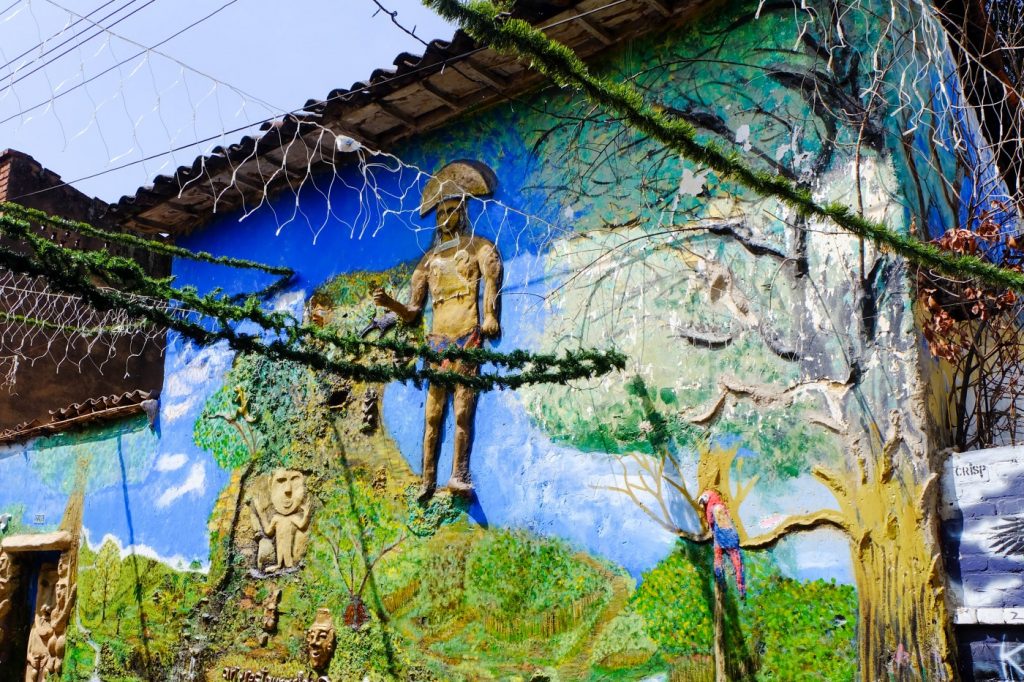 If you keep your eyes peeled, you’ll likely find works from these artists all over Colombia. I was excited to stumble across street art from some of the same artists in Cartagena! I wouldn’t have even recognized the artists if it wasn’t for this awesome Bogotá street art tour. 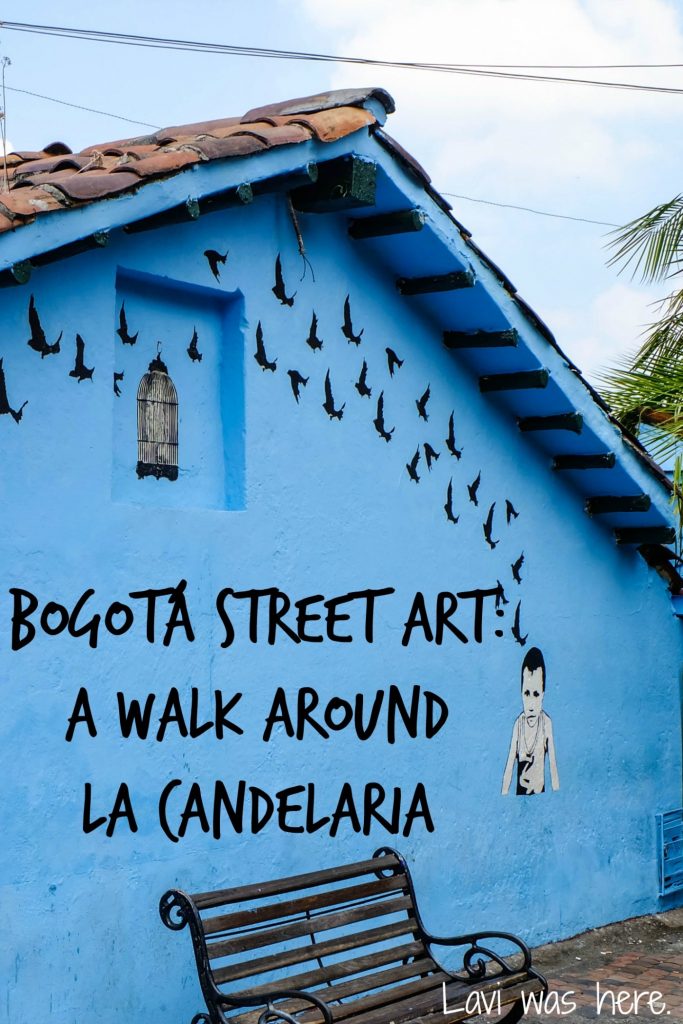