The mansion was in shambles now, but I could almost picture it in its prime. Pablo Escobar and his crew, money and drugs on the tables, smoke mixed with music wafting through the air. Maybe I’ve just watched too much of Narcos, but I could all but see this vision in front of me as I walked through Pablo Escobar’s mansion in Guatapé. 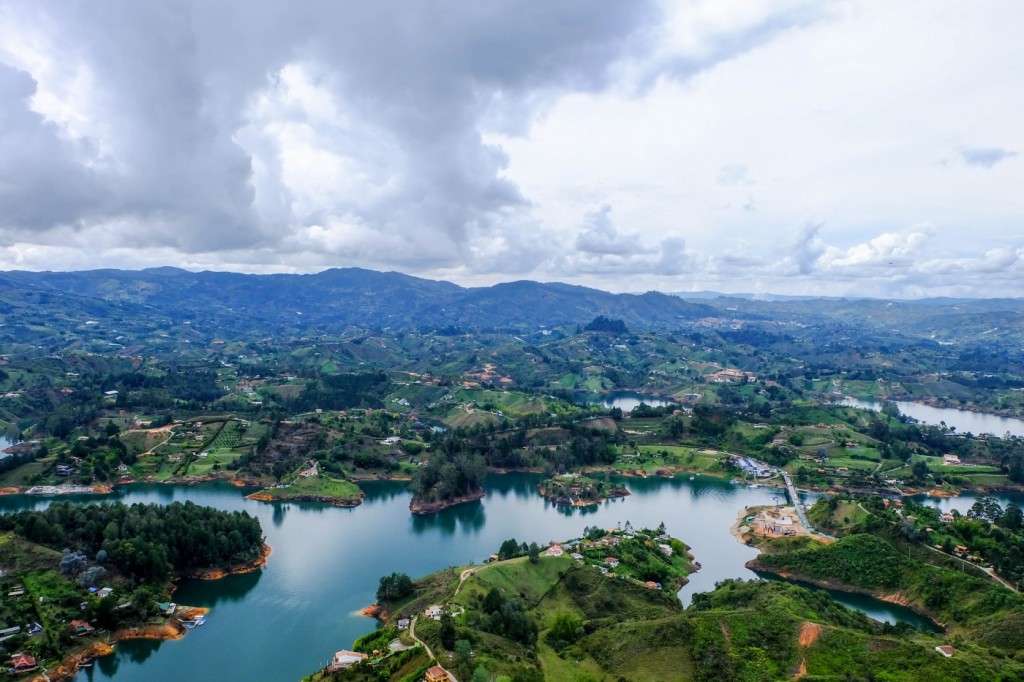 Guatapé was a surprising hidden gem for me in Colombia and one of the most beautiful and fun places I visited in Colombia. A two hour bus ride from Medellín, Guatapé is known for El Peñol, a giant monolithic rock that basically looks like it fell out of the sky, and the stunning view of the manmade lake and small islands surrounding El Peñol that I admired after climbing the 740 steps to the top of the rock. I must have come at the right time, because the streets were filled with stands of delicious street food and the town was buzzing with excitement and life. 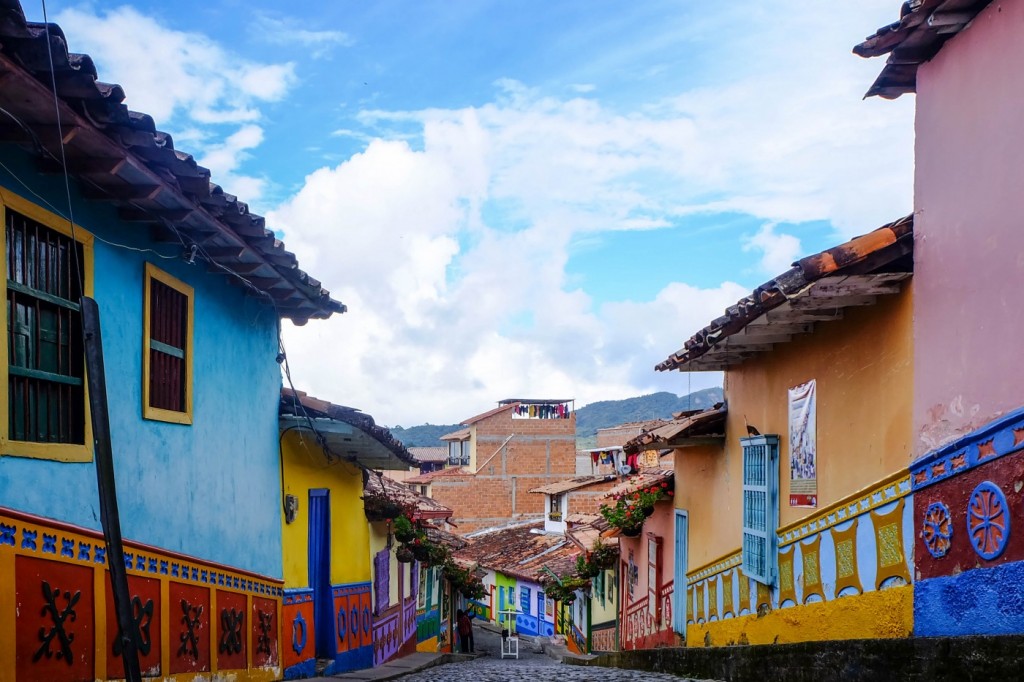 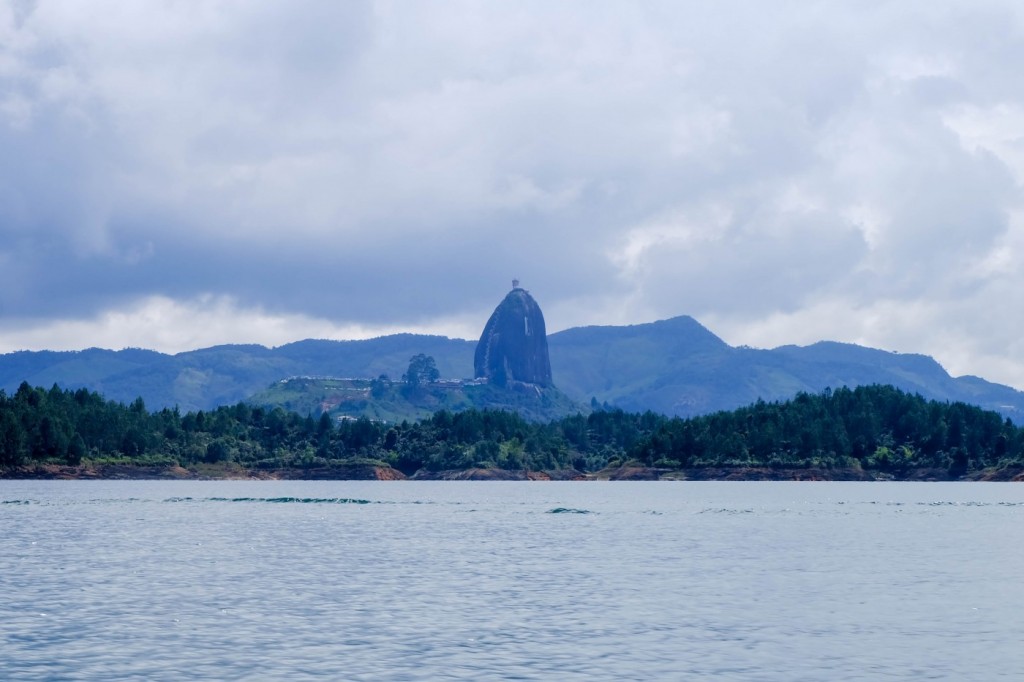 One more thing; Guatapé is also known to be the location of one of Pablo Escobar’s many mansions. Aside from visiting the mansion on a tour, I had no idea that playing paintball in Pablo Escobar’s mansion in Guatapé was even an option. When I heard about it at my hostel in Medellín, I jumped right on that opportunity. Who wouldn’t? Playing “cops and robbers” was fun as a kid, but playing “cartel vs. cartel” in a real drug lord’s house as an adult? Yup, I was so in. 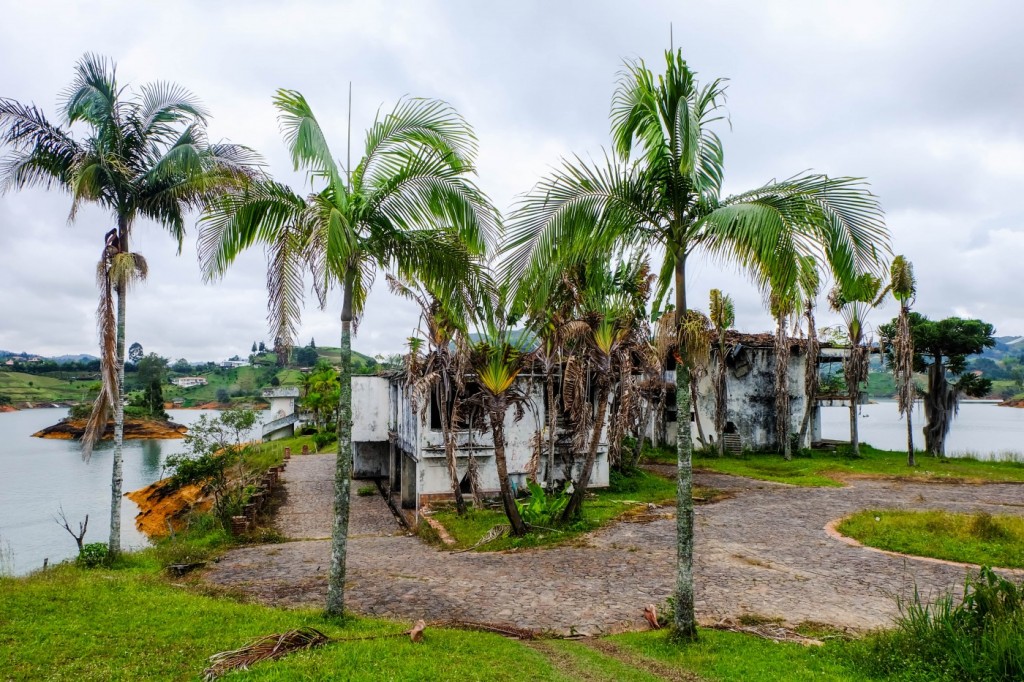 It’s only fitting that the skies were gray and overcast with foreboding clouds when I visited La Manuela, the mansion that Pablo Escobar only visited a handful of times while it took 300 people to build it in five years. As I carefully stepped over debris and walked through the mansion, I could imagine the absolute chaos that ensued after the Cali cartel bombed Escobar’s mansion in 1992 and the police subsequently raided the place. The double walls ripped apart by the bombs, exposing the money and cocaine hidden within that were quickly seized, leaving nothing but Escobar’s broken dreams in a broken house. 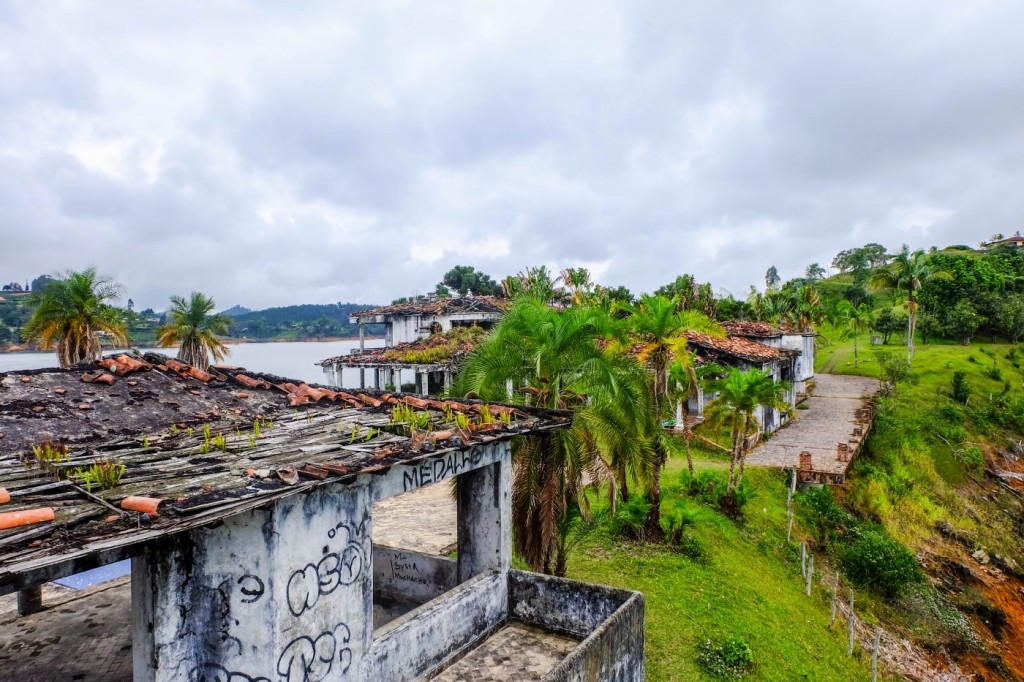 The pool that was once likely filled with crystal blue water where one can assume beautiful women once swam now was partially filled with green, swampy water that I certainly would not want to take a dip in. The mansion’s pillars and courtyards were overgrown with greenery. 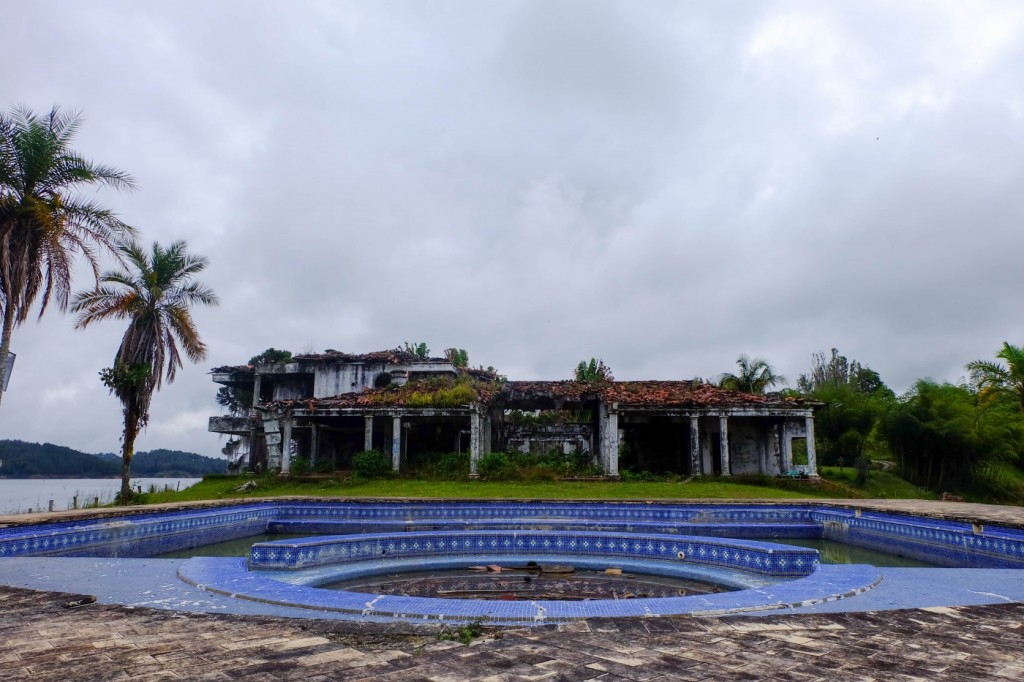 If you ask me, the mansion was still beautiful in ruins. 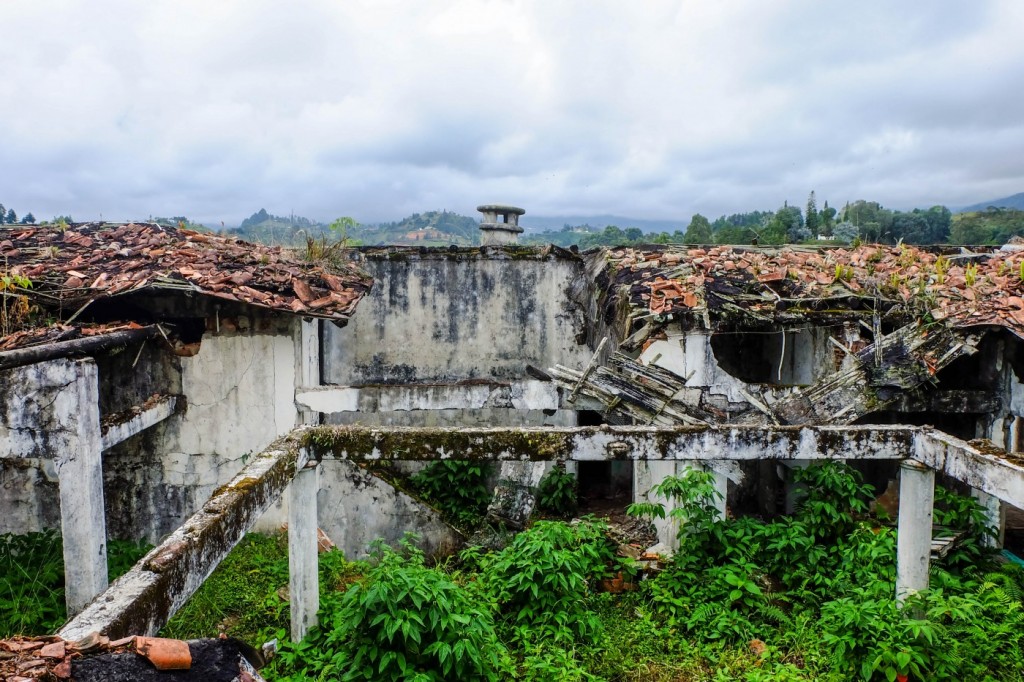 Our guide walked us through the property and showed us Escobar’s house and children’s rooms, the driveway built for his motorcycles, the house for his friends, the stables, the tennis court and soccer field – you name it, Escobar had it on the grounds of this mansion. He even had trees native to Australia, Canada, and Japan on the grounds.

The guide showed us all of the clever places in the house where there once were double walls in which the money and dugs were hidden. He told us about how Escobar committed suicide; this is contrary to what I’ve read in my research about his final days, but our guide stuck by his statement.

The tour was informative and eye opening, but the real fun came when it was time to play paintball. We split into two teams and donned our body suits, masks, and paintball guns in the area that was once the part of the house called the discoteca. 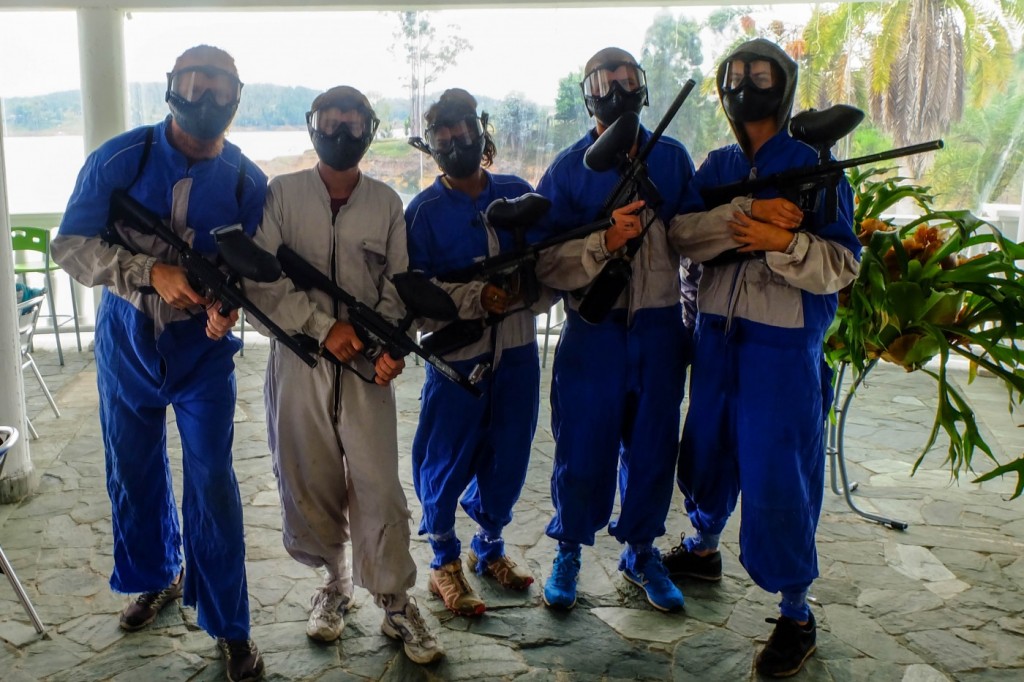 Having never touched any sort of gun aside from a Nerf gun or Super Soaker in my life, the paintball gun was much heavier than I expected it to be. One of the three girls in the entire group and one of the few with zero experience playing paintball, I was nervous. I want to be treated like one of the guys; but they’re not going to really shoot me, right? Ok, yes they definitely will shoot me, who am I kidding? So how much is this going to hurt?

The game was simple; our team was in Escobar’s friends’ house while the opposing team was in the yard and stables and we had to capture the flag in the middle of the yard. As soon as the game started, I realized my tactic was also quite simple: don’t get shot.

I’m not exactly the subtle, stealthy type. As soon as I peeked out from behind a pallet in the corner of the room and tried to shoot, my fire was received with fire. It didn’t take long for me to get hit in the hand, the only place I was really exposed. I should have seen that one coming, though I could barely see through my goggles anyway.

When we switched sides and our team was in the field, I felt especially vulnerable. I climbed up and down dirt mounds in the stable, hid and tried to shoot off a few rounds before someone saw my feet through a hole in the stables that I missed and shot me – and I thought I was being so sneaky! 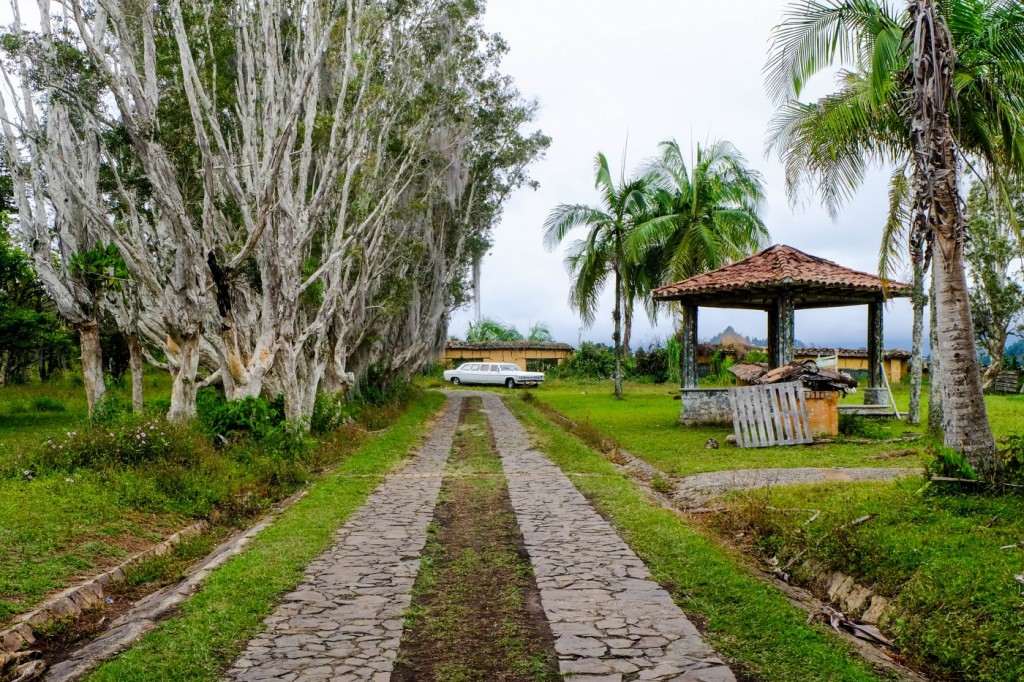 After a few rounds of capture the flag, we played a game in which one member of our team was Pablo Escobar and our job was to protect him from the Cali cartel and then our teams would switch. I could barely protect myself, let alone the pseudo-Escobar on my team, but I tried my best. Let’s just say I’m not really cut out for the cartel life.

As the game went on, I didn’t want to keep hiding, I wanted to actually get someone out! As hard as I tried, my attempts were futile and I ended up just looking like an awkward blue target instead of a sly cartel member. The damage? A few shots to my arm, but nothing in comparison to the dried blood and circular welts on the bodies of my male friends on both teams.

Visiting Pablo Escobar’s mansion in Guatapé was undoubtedly one of the most interesting and coolest activities I experienced in Colombia. It’s not every day that you get to walk through history, see it raw before your very own eyes, and then get to play paintball in it. 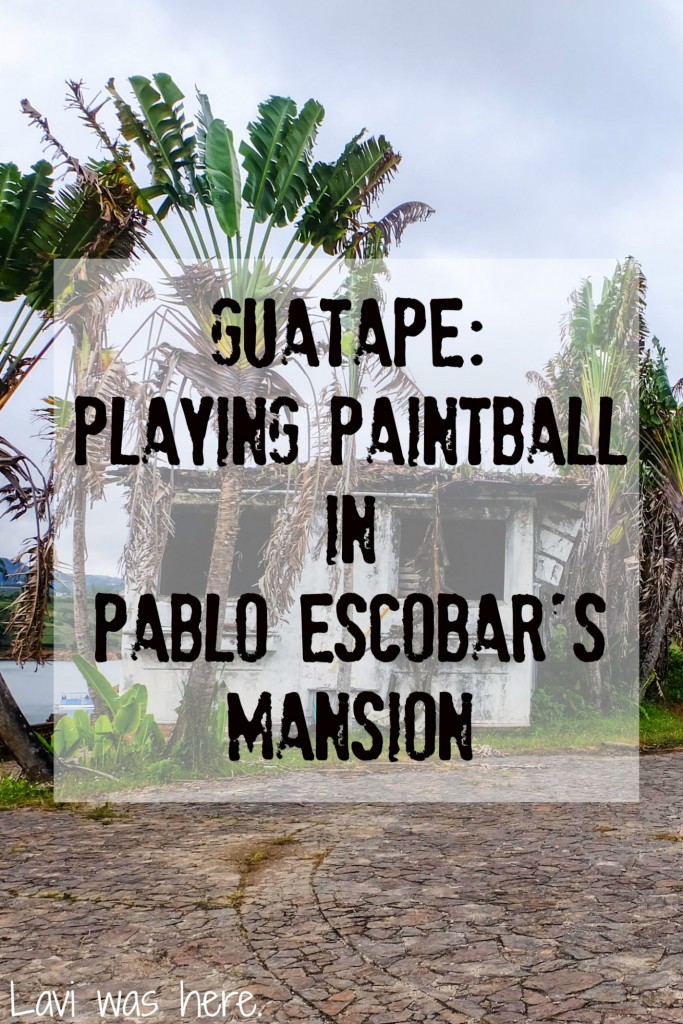