The misty clouds, the mountains, the swing in the clouds; we’ve all seen the photos. Baños, Ecuador, is synonymous with the “Swing at the End of the World”.

My life is in full swing. That weightless, roller coaster feeling…I want it to last forever.

Similar to a lot of photogenic tourist spots, what you see in a photo isn’t exactly what you in get in real life. My friend Burke and I discussed this. We all love those Instagram-worthy photos (me included), but it would be a good idea to give the behind-the-scenes scoop as well. It’s important not to filter or Photoshop out the not-so-glamorous parts of travel. I truly believe that.

So here you have it: this is what it’s really like at the Swing at the End of the World at Casa del Arbol (The Treehouse) in Baños.

We took a bus from the center of Baños up to the top of the nearby mountain where Casa del Arbol sits. The buses only run a few times a day and are the cheapest way to get to the swing. 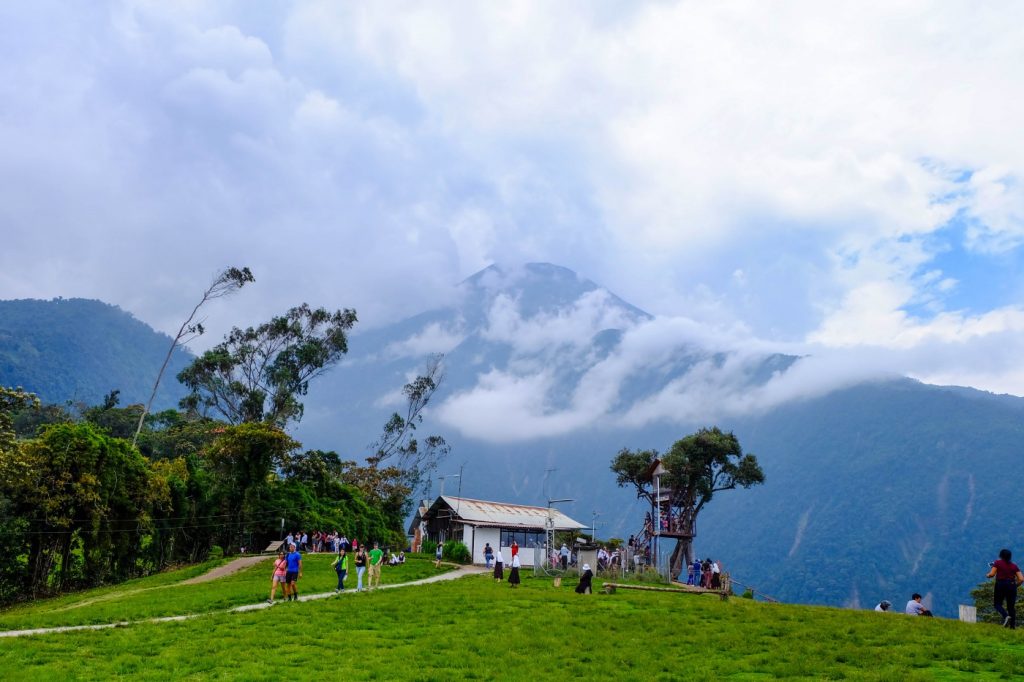 Upon arrival, I saw one swing that didn’t look like a tree house at all. It was actually a new swing that was built that had a steeper drop and designed to give those roller coaster-like butterflies. I wanted the real swing experience, though, and knew I’d be waiting in line. I skipped ahead along with most others to the main event.

I didn’t expect the real Swing at the End of the World to have two swings, one on each side of the tree house. Every photo I’d seen made it look like there was only one swing! In reality, two people were swinging at any given time while friends scrambled to capture the photo. Maybe there only used to be one until the swing became such a popular spot to visit. 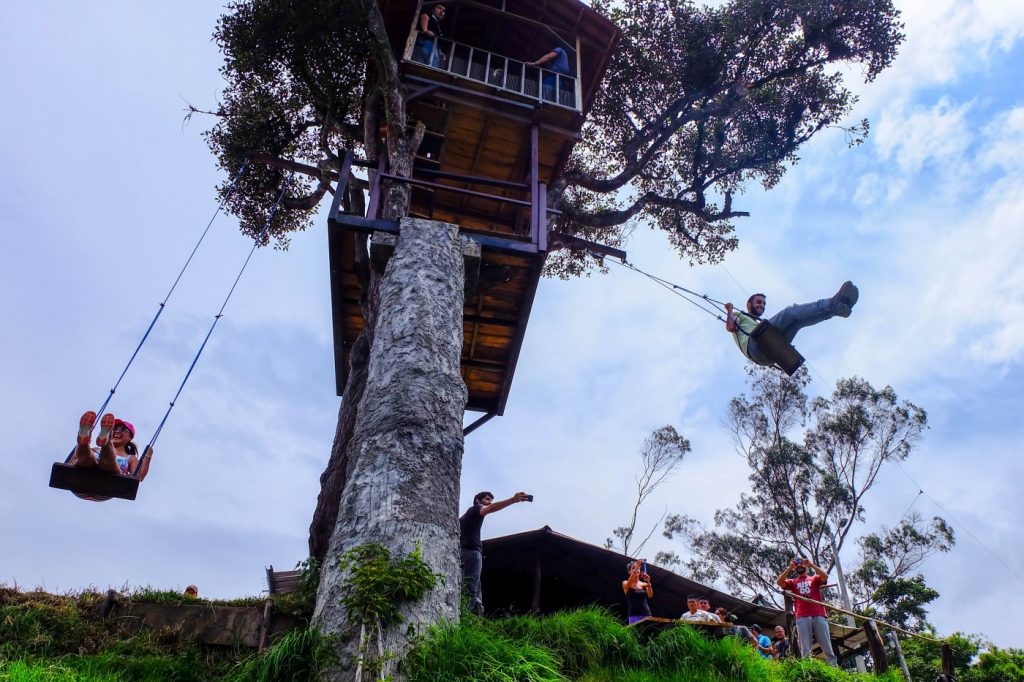 I started out in a line on the left side of the tree house but switched to the right side after realizing that not everyone was aware of the other people waiting in line behind them. The lines were long, too!

Burke had a great idea: we’d take a few photos of other people to see which angles would create the best shots. We had plenty of time to figure it out as we waited in line for about half an hour. The wait wasn’t bad; we met some other travelers whom I opted to photograph and send over the photos afterward. 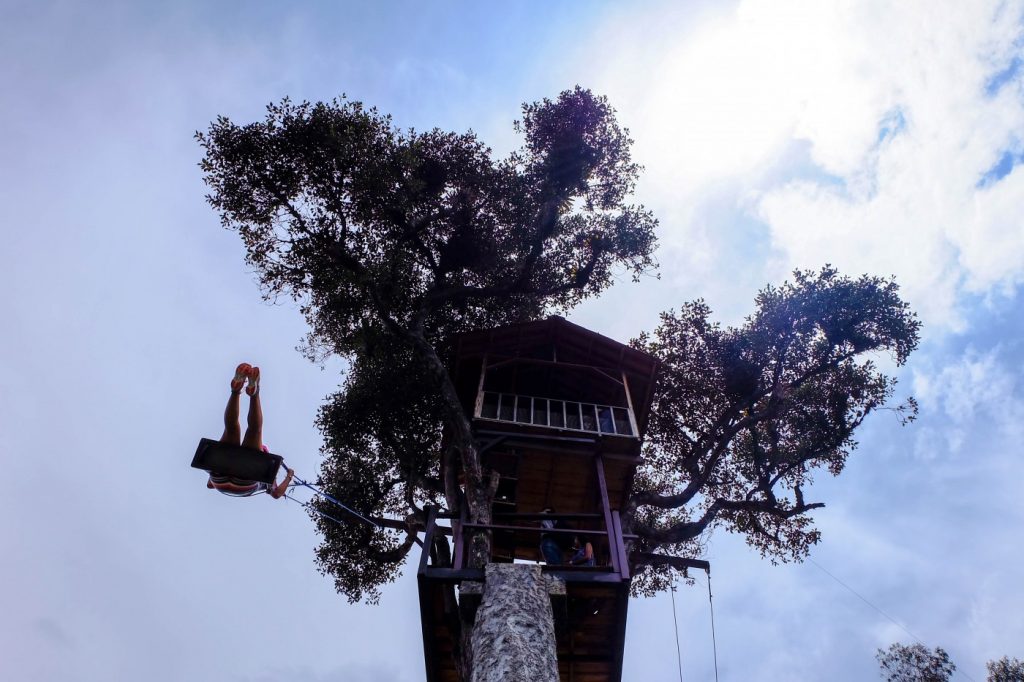 The swing looks like it’s at the edge of the mountain with a big drop, like you could fall to the deep, dark depths of Ecuador below. I don’t think the fall would actually cause anyone to meet his or her demise; it’s actually not that steep.

But it was fun. The local man who was in charge of the swing had disappeared for a moment, so one of the new friends I’d made in line encouraged me to get on the highest step. My butt actually slid off the seat because of the awkward vertical angle the swing was at. 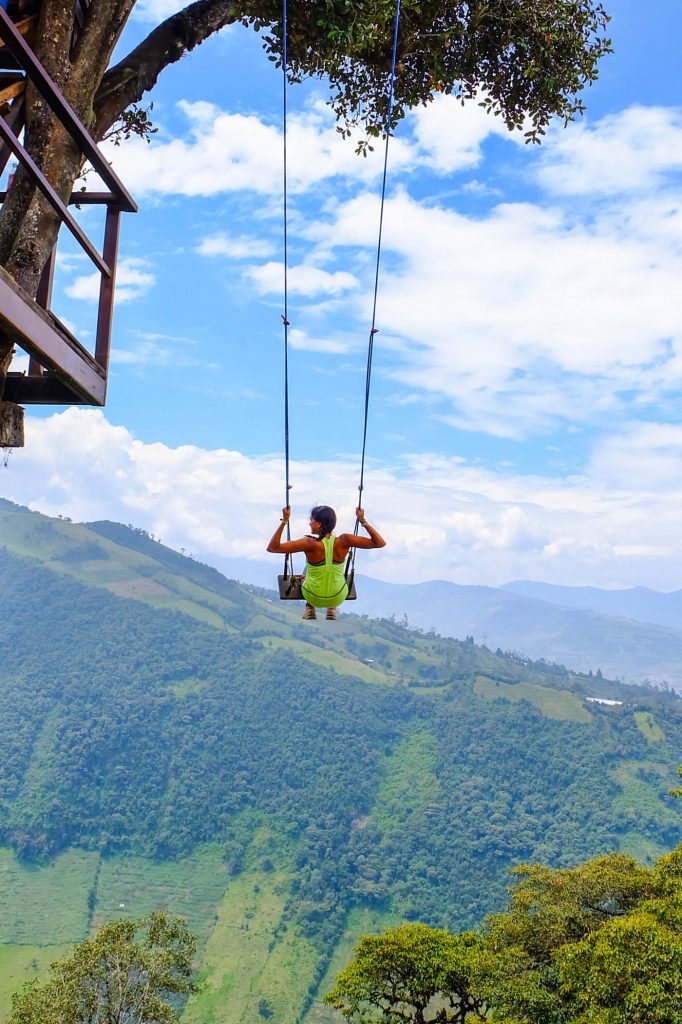 With a firm push, I was airborne! I was flying! At least that’s what I felt like. The swing had a flimsy strap across the front; I wasn’t exactly harnessed in. As long as I was holding on – which I was, tightly – I wasn’t going to fall. After a few pushes and moments in which I felt weightless, the local worker slowed down my swing and I hopped off. Lucky for me, I had Burke running around taking photos of me from all angles in that brief one or two minutes that I was in flight. My time on the swing was going to last for eternity – in photos! 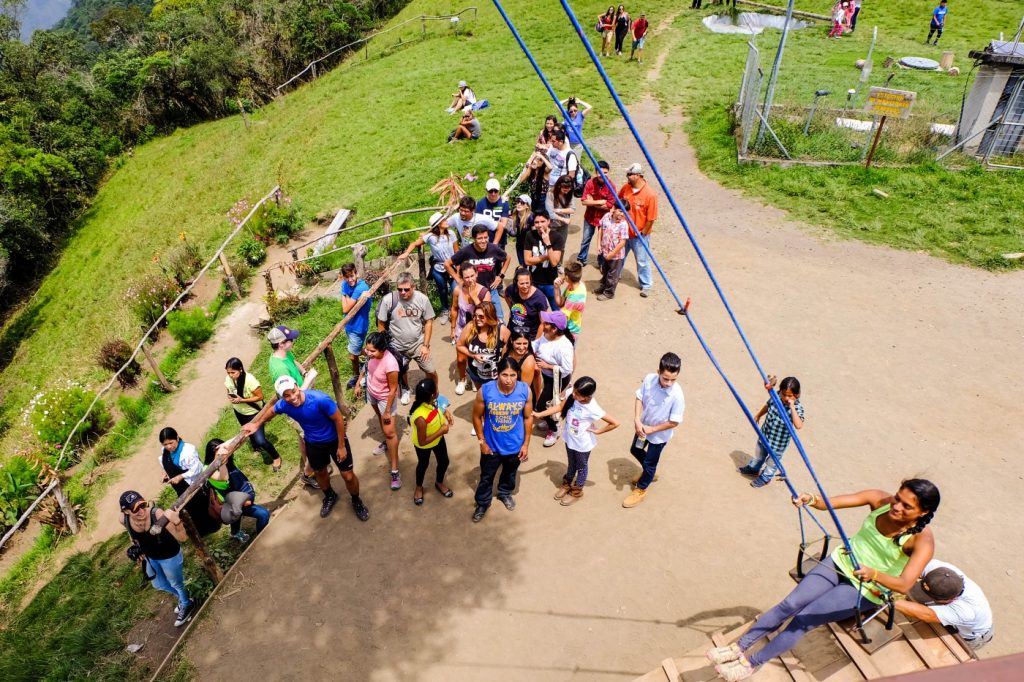 As brief as it was, I loved swinging on the Swing at the End of the World. The view was breathtaking. We were fortunate; the sky was a bit hazy but we could still see a little bit of Tungurahua Volcano in the distance. It was peaceful up there. 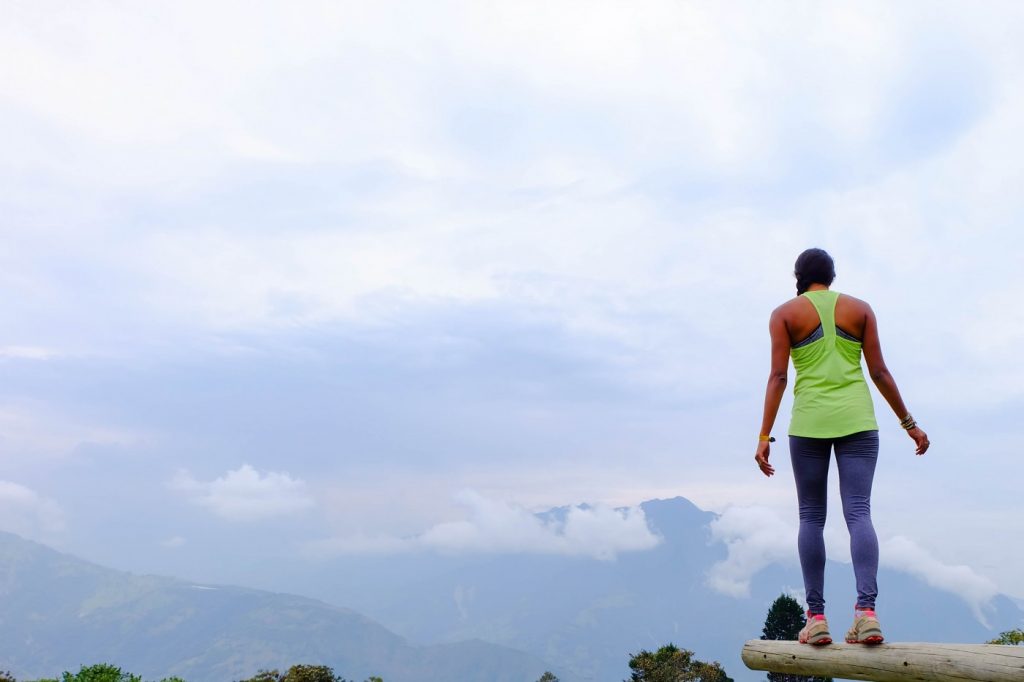 The area around Casa del Arbol was really beautiful. Once we’d taken our photos on the swing, we had some time to goof around on the other random objects on the hill that people could climb on and capture different shots. 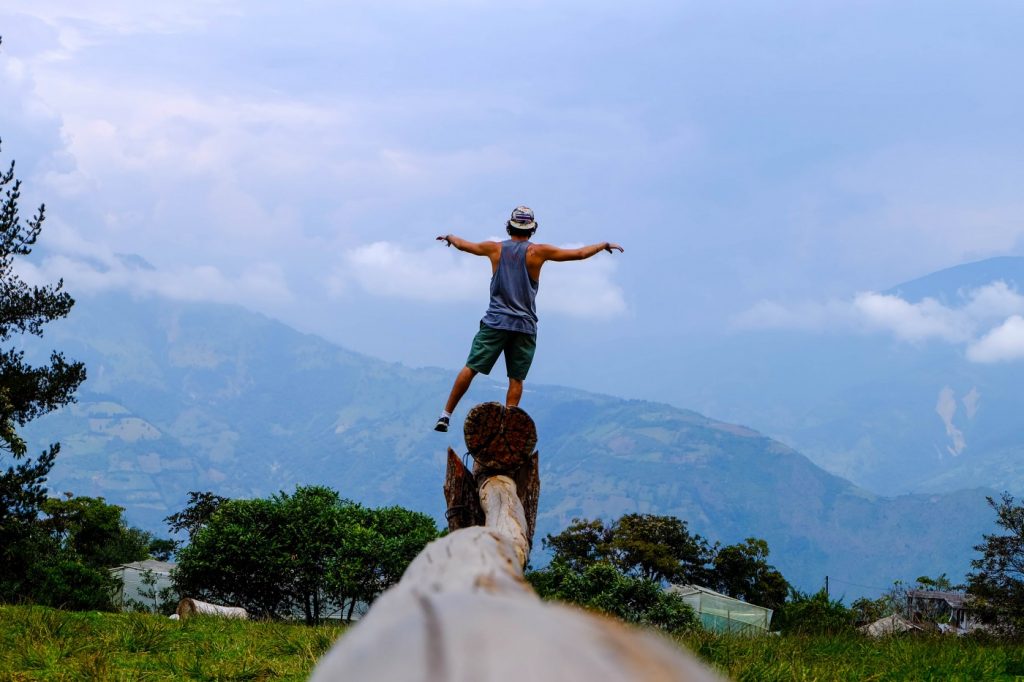 I hope the truth behind this iconic photo isn’t disappointing. I just want to be transparent about what the experience really was like. It’s not always sunshine and rainbows. Every postcard-worthy photo comes with long lines with crowds of tourists and selfie sticks, but that’s also because they’re worth the visit!

Between the Swing at the End of the World and bicycling the Ruta de las Cascadas, Baños was such a fun and exciting place in Ecuador to spend a few days. Don’t miss it!

Know Before You Go:

Have you ever been to the Swing at the End of the World? What did you think of it? 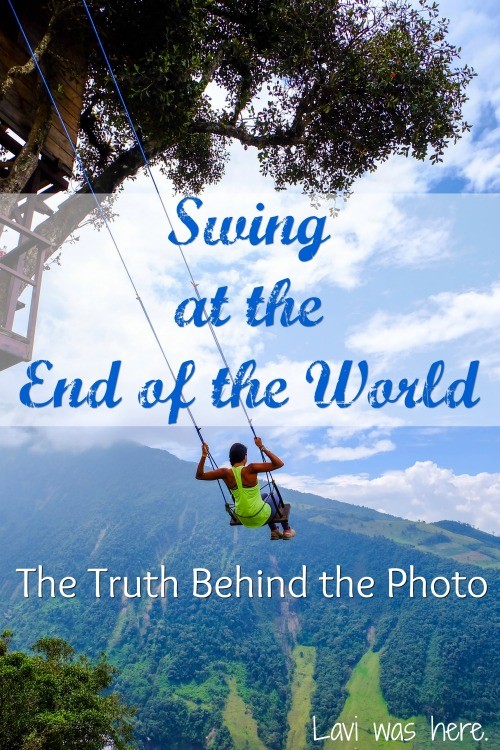