Alternatively, this post could be called “That Time I Pissed Off An Entire Bus Full of People” or “How NOT to Cross the Border from Peru to Bolivia”, but I’m getting ahead of myself. 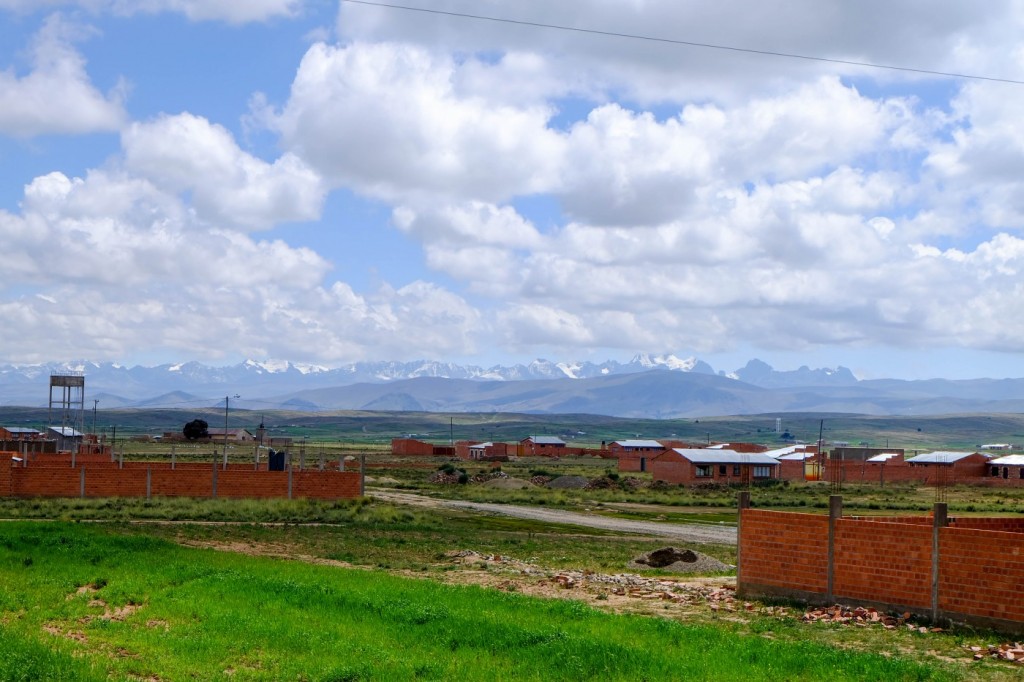 I wasn’t looking forward to my overnight bus from Cusco, Peru to La Paz, Bolivia because: A) I booked the ticket online and wasn’t convinced that I had really secured a seat on the bus; and B) it was going to be my first overnight bus and border crossing alone in a few months, and it’s always more fun with a friend in tow. Stinky armpit smell aside, the bus really wasn’t that bad, but crossing the border from Peru to Bolivia was probably the most stressful experience I’ve had on this trip.

The Peruvian border official told me that I was supposed to pay the $3 at a bank and then bring the proof of payment to the border. Since I didn’t do that, I would have to pay $10 plus the $3 for the days I overstayed my visa. Okay, fine, I could handle that. I paid, he stamped my passport indicating that I overstayed my visa, and advised me that I had to go across the street to make a photocopy of the passport pages. By this time I was already worried because I was the last person on the bus to cross the border and I didn’t want to hold everyone up. I hurried over to the store, made the copies, and walked over the border.

As I walked across the bridge in that “No Man’s Land” area between Peru and Bolivia, I looked at the sign “Bienvenidos a Bolivia”, thinking that I should take a photo of it since I would only cross this border once and never see this sign again. I didn’t take the photo, and little did I know I’d end up running back and forth across that bridge multiple times.

I thought I had everything sorted for my Bolivian visa. I was ready to hand over the $160, yellow fever vaccination that I felt so accomplished for getting while spending a week doing absolutely nothing in Lima, show the border official my reservation for my hostel in La Paz on my phone, my bank card to show economic solvency, and be on my merry way to La Paz. I forgot for a second that I am me, after all, and things are just never that easy.

(For all of this dialog, just imagine a little Bolivian lady with a high pitched voice yelling at me. And imagine it in Spanish).

“Please tell me you already have a visa for Bolivia!” the border official said as she leafed through my passport. I told her I didn’t, but I had all the necessary items, to which she replied that I certainly did not, because I wasn’t holding a folder.

“Where is your folder?”

“Ay! You need to fill out a declaración jurada! And give me a passport photo, print out your hostel reservation, copy of your bank card and yellow fever vaccination, not the originals! And you have to go back over to Peru to do this because there’s no computer for you to print anything here,” she said as I started swearing to myself in English. There was no need to do it under my breath, she had no idea what I was saying.

By this time, everyone on my bus is just hanging out outside the immigration office, waiting for the bus to drive over the bridge as I took off back to Peru, thinking this would be a quick operation. I was retrieving extra my passport photo from my big backpack from the luggage storage part of the bus when one of the three bus drivers asked what was going on. As I explained and asked if he knew of an internet café, he told me that because it was Sunday, most stores were closed, which I could see as I looked around. He also told me that they needed to get moving, to which I asked him what I was to do in this situation.

I needed to wait? Wait for what? They were going to leave me here and I was going to have to commandeer one of these tuk-tuks driving around or walk to La Paz?

I pleaded with him to give me five minutes as I ran over to the store where I made copies the first time. Thankfully, there was an ancient computer there that I didn’t see before. I told the owner of the store what I needed and she gave me a paper that didn’t quite look like the paper that the border official showed me was the declaración jurada, which Google Translate tells me is a “sworn declaration”, but really was just a paper with my contact information on it and basically has the same information as the immigration card. Regardless, I couldn’t find what she had showed me on the internet. So I just took the paper the store owner gave me and ran back over to Bolivia.

I wish I could just imitate the tone in her voice as she looked at the papers I had in disdain. I should have known; I had the wrong paper. She gave me a copy of someone else’s declaración jurada and told me to go and find this exact paper on the internet, waving it in front of me as I struggled to keep my cool.

As I ran out the door, I bumped into the same driver who told me they might have to leave me behind. He asked what happened and before I knew it, my voice cracked and hot tears of frustration started rolling down my cheeks as I tried to explain that I had to try to find this paper online that I couldn’t find. I felt like such a baby; I really tried to suppress the tears. I told him to give me five more minutes and I hustled back over to my favorite internet and photocopying store in Peru.

I typed out the exact words I saw on the random traveler’s copy, found what I needed online, and ran back over to Bolivia. Finally, this is over.

I skipped the entire line and presented all the correct papers.

“But where’s your folder? Go buy a folder!”

“En serio?” Seriously? What I really wanted to say was, “Are you f-ing kidding me?”

This is where I was half-expecting Ashton Kutcher to jump out from under the desk and tell me that I’d been “punk’d”. Luckily, there was one store next to the immigration office that sold folders. Problem solved!

“You haven’t paid yet? You have to pay!”

I’m not sure at which point this border official woman thought I had the time to go to the payment desk when she had me running back and forth over the bridge like a circus animal. And lucky for me, the person at the payment desk had mysteriously disappeared. The old man driver had taken pity on me after he saw my tears and had been trying to help me out. He asked the police officer handling the payments for the Bolivians entering the country, who responded coldly that we needed to be patient. The driver whispered to me that we should be compliant so that they let me into the country. I kept my mouth shut and stopped asking where in the world the person at the payment desk went.

Finally, he turned up, took my $160, and started examining each and every twenty-dollar bill. He told me that there couldn’t be any rips or tears in the bills. The only thing he was missing was a magnifying glass; the man was checking each bill so carefully that I thought for sure he would find a problem with the money. Thankfully he didn’t because I only had about $40 more with me.

Then, he took my photo. Now, had I known this photo would then be printed on my visa, maybe I would have forced a smile. Instead, I look like a serial killer with gigantic, glaring eyes. And this photo is now stuck on one of my passport pages.

When it really was all over, two of the drivers and I ran back to the bus. Those two drivers sympathized with me because I’d already explained to them that I didn’t know I needed to print out those forms while the third waiting in the bus yelled at me and told me that I had made everyone wait for over an hour and some passengers needed to catch flights, blah blah.

I apologized to everyone as I made the walk of shame back to my seat, which of course was the very last seat at the back of the bus. I breathed a huge sigh of relief as I sank into my seat, which still smelled like stinky armpits.

If I didn’t speak Spanish, I’m pretty sure the drivers would have left me and I would probably be stuck learning the peddling tricks of the trade from the cute old women selling old coats in that No Man’s Land between Peru and Bolivia.

Sometimes, I just have to laugh at myself. Like, oh Lavi, there you go again getting yourself into a stupid/crazy/ridiculous/overly complicated situation. Of course this would happen to you. You thought this was going to work out? You’re so cute when you’re naive. As I re-read this story and replay it in my head, it really is just another day in the life. And it is kind of funny, though I wasn’t laughing at the time.

But I made it.

For any Americans traveling to Bolivia, this is what you’ll need for a visa (at least when entering the country overland):

I really doubt the folder was as mandatory as the border official made it seem, but hey, what do I know? 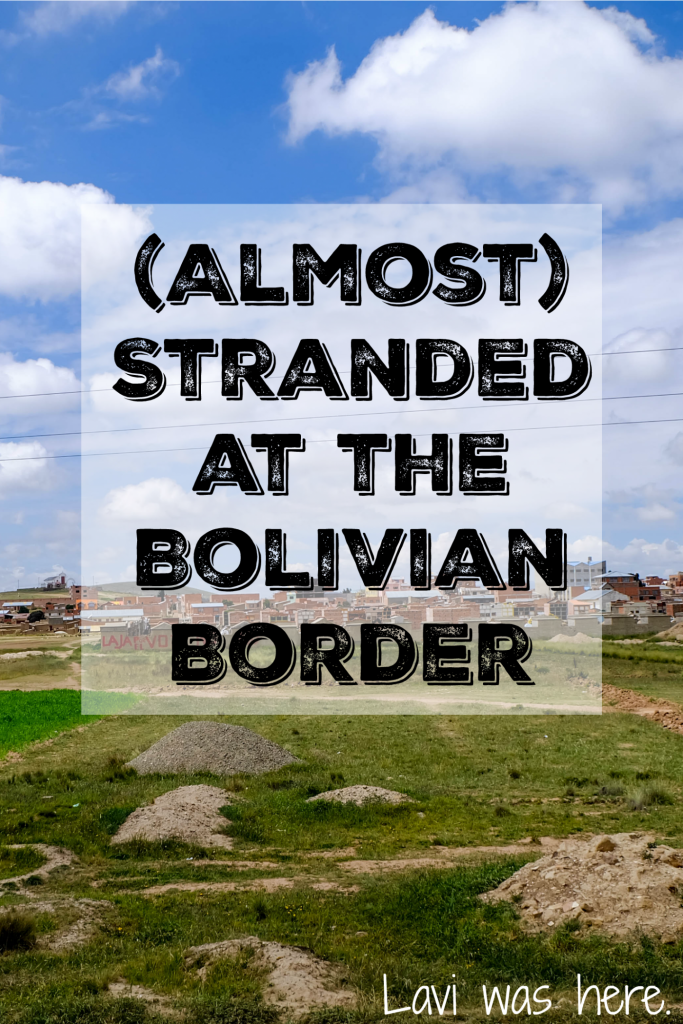