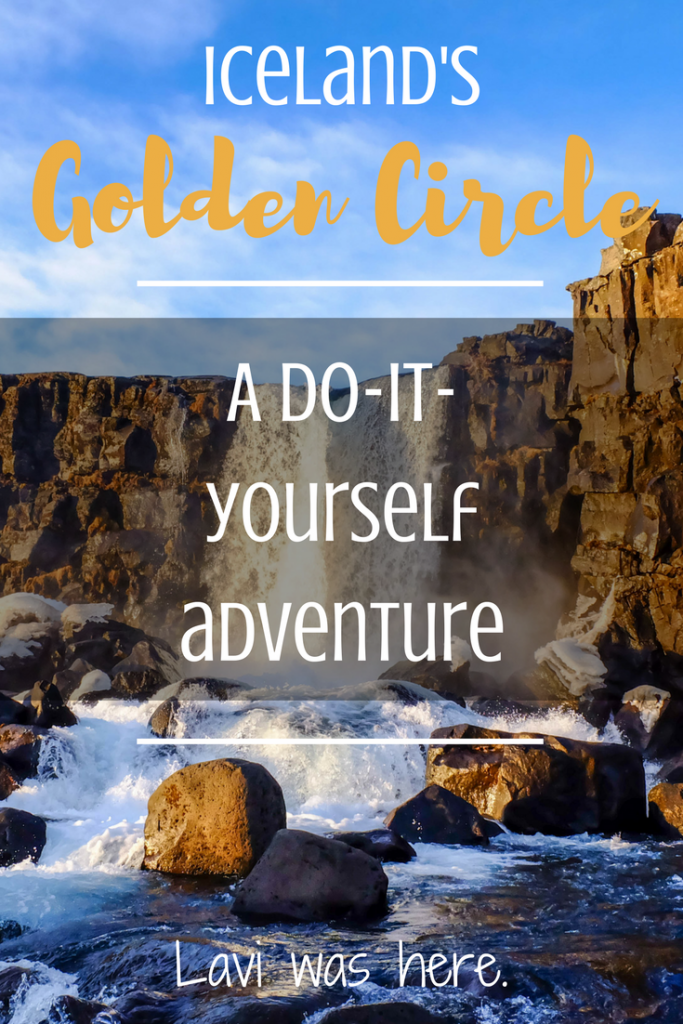 If you want to get a taste of Iceland’s expansive landscapes, driving the Golden Circle is a great way to do it. This loop will take you from Reykjavík into the Icelandic uplands. In a day trip, you can experience a lot.

Although there are day tours that can take you to all the spots on the Golden Circle, it’s best to experience it by renting a car and driving it yourself. Among the many other benefits of renting a car in Iceland, it allows you to make as many stops along the way as you’d like. Trust me, you’ll want to make more than a few unscheduled stops.

I didn’t get to see all of Iceland, but I did have a better-balanced view of Iceland by coupling the Golden Circle drive with a road trip down the South Coast. You can absolutely do this in a one-week trip to Iceland and you’ll see so many amazing things along the way. 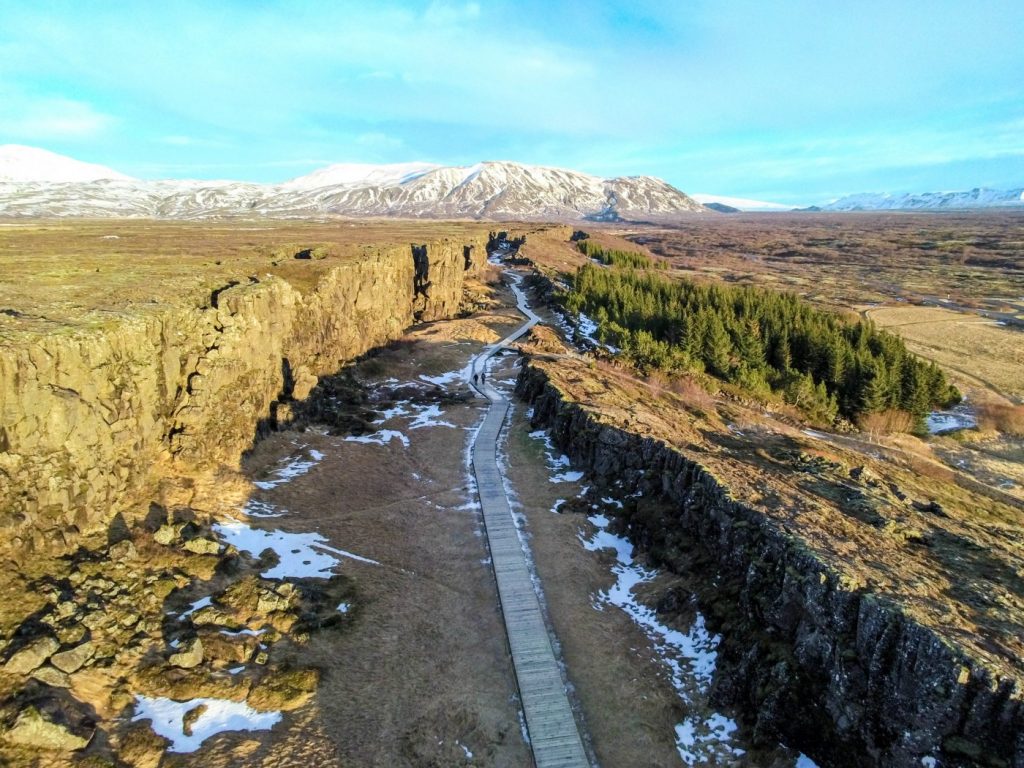 Thingvellir National Park in Iceland is the only part of the Mid-Atlantic ridge above sea level. You can stand in between the tectonic plates and in warmer temperatures you can even dive or snorkel the Silfra Fissure between the two tectonic plates. 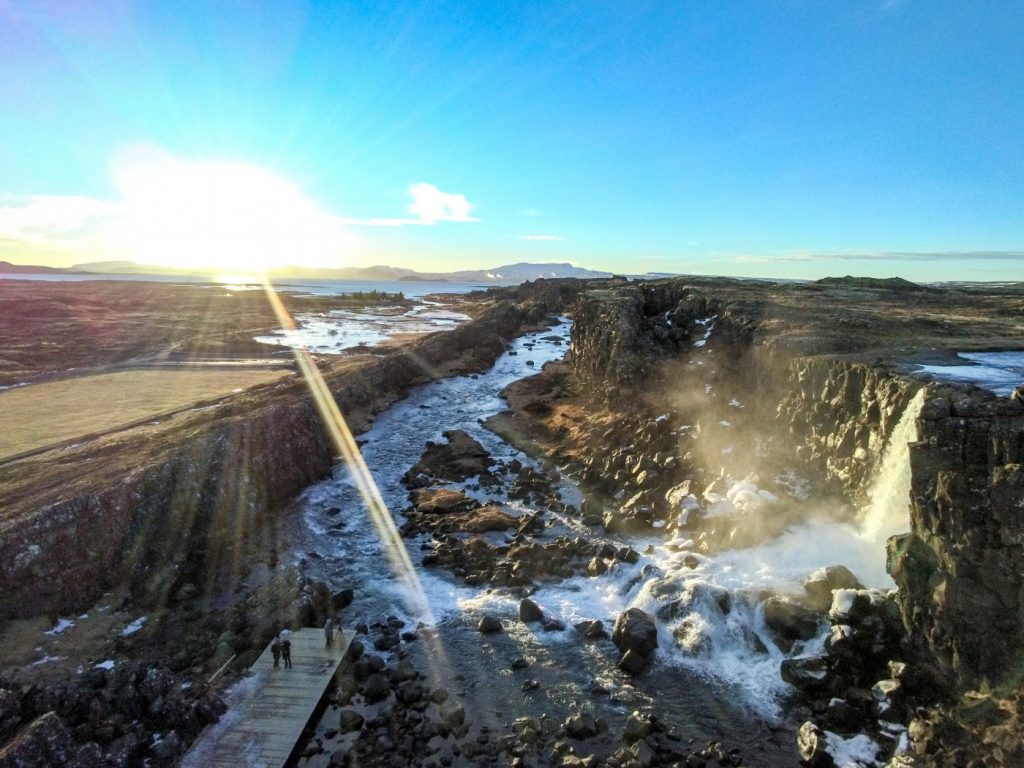 It might sound kind of “science-y” for lack of a better word, but I felt like I was standing in a very unique and special part of the world between the North American and Eurasian tectonic plates. It’s hard to fathom how many years it took for the block-like layers of the plates to stack upon one another. The Öxarárfoss waterfall is absolutely stunning as it cascades down over one of the plates. There truly is nowhere in the world like Thingvellir National Park. It’s also a UNESCO World Heritage Site! 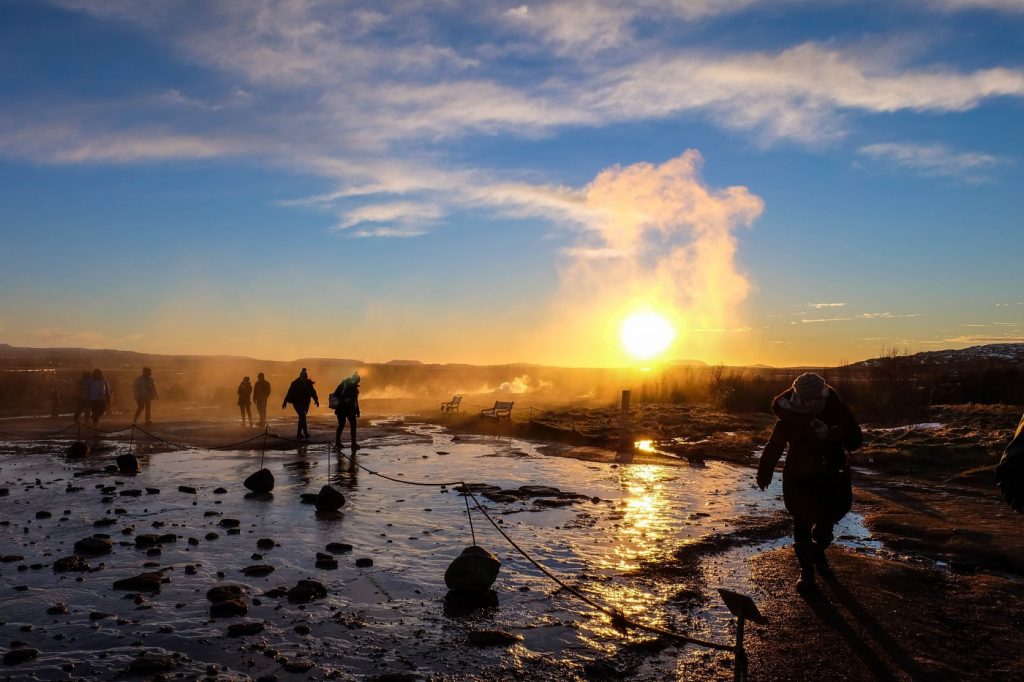 Now I’ve never seen Yellowstone National Park’s Old Faithful, but the Strokkur geyser was pretty impressive. Part of the Haukadalur valley, Strokkur is just one of a few geysers in the area. Steam appears to be sizzling straight out of the ground. We arrived and joined a throng of people around what kind of looked like a watery mud pit. And then waited. 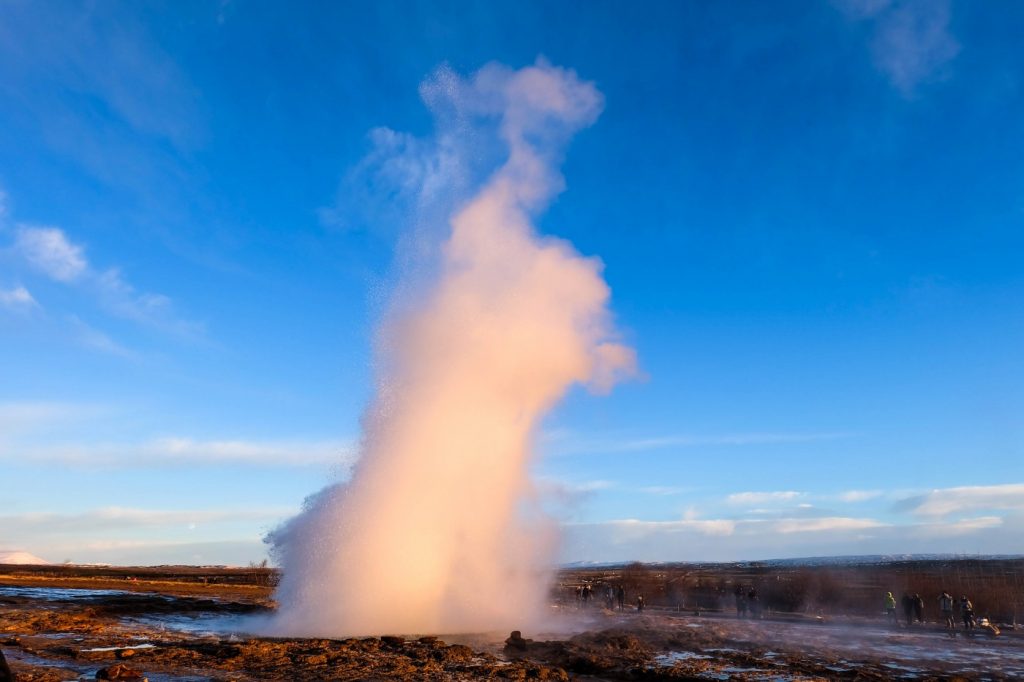 We didn’t have to wait long; Strokkur erupts every 6-10 minutes. I stood with my camera ready and as soon as I saw a massive bubble forming in the water, it only took seconds for the geyser to erupt. It lasted only a few seconds but it certainly left a mark – and a smell! Strokkur is certainly a sight to see, and a sulfuric smell to experience. 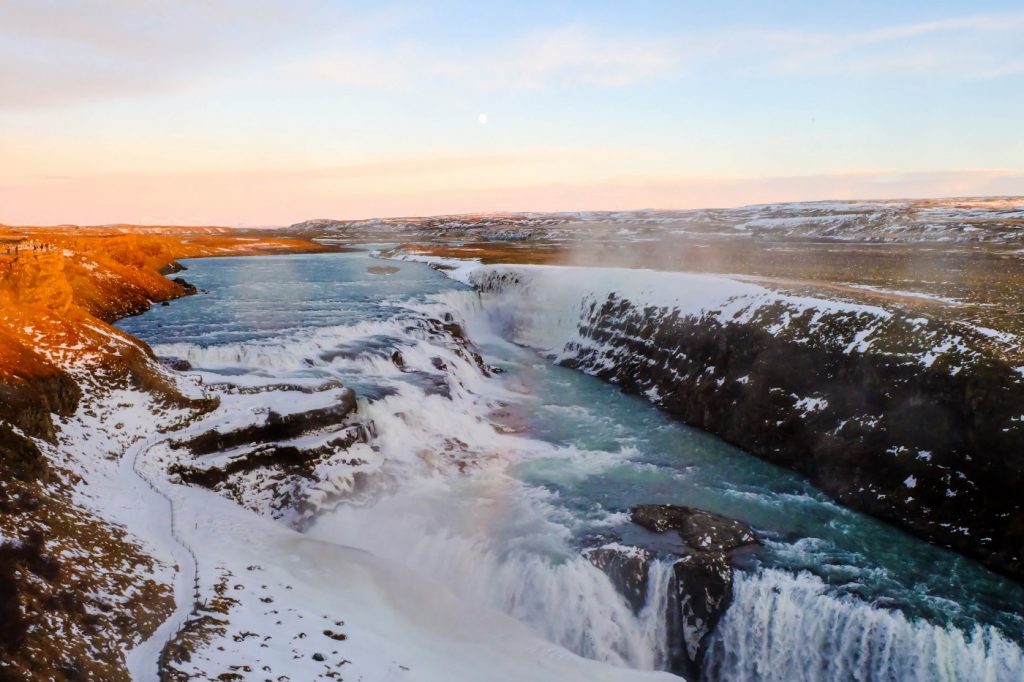 The last stop on one of our Golden Circle drives was Gullfoss. This waterfall cascades down three steps before plummeting down a crevice. There’s a legend that the daughter of the owner of Gullfoss threatened to hurl herself into the waterfall if it was to be rented to generate electricity. Today, visitors can find a memorial to her at this beautiful protected and unexploited waterfall. 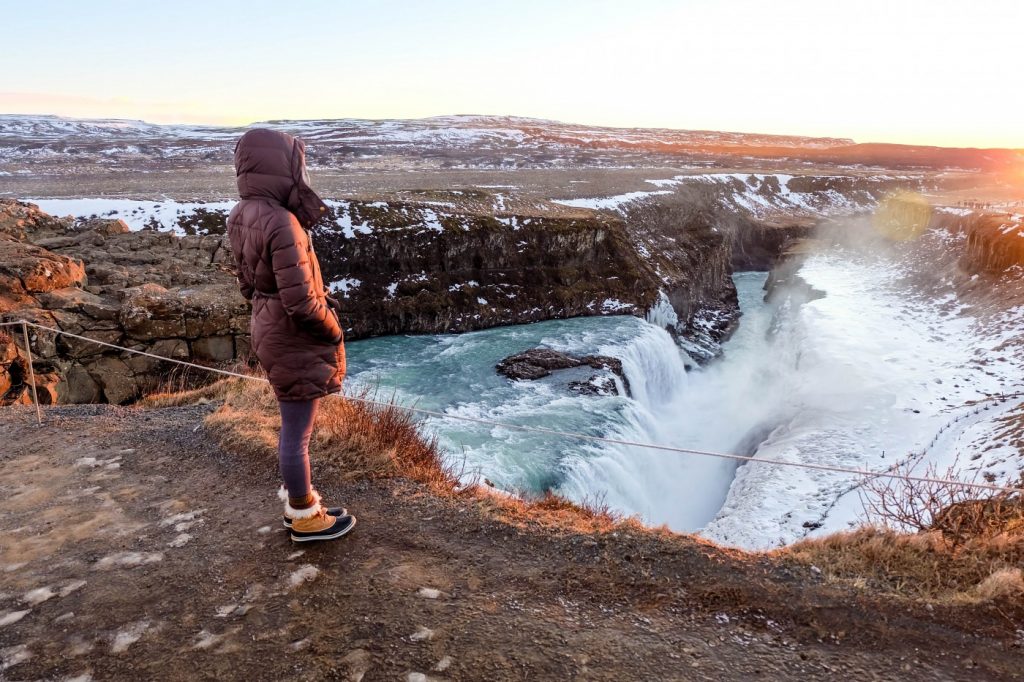 We arrived close to sunset during the “golden hour” of daylight; the view was breathtaking. The moon was fully visible on one end while the sun set on the other. There was a rainbow in the waterfall and the sky was pink. I wouldn’t have wanted to see Gullfoss at any other time of day.

Snowmobiling on Langjökull, the second largest ice cap in Iceland, is an adrenaline junkie’s dream. This is such a fun adventure if you have extra time after seeing the major Golden Circle sights or have a free day. This was my first time snowmobiling, but there was no better place to hit the gas and go. 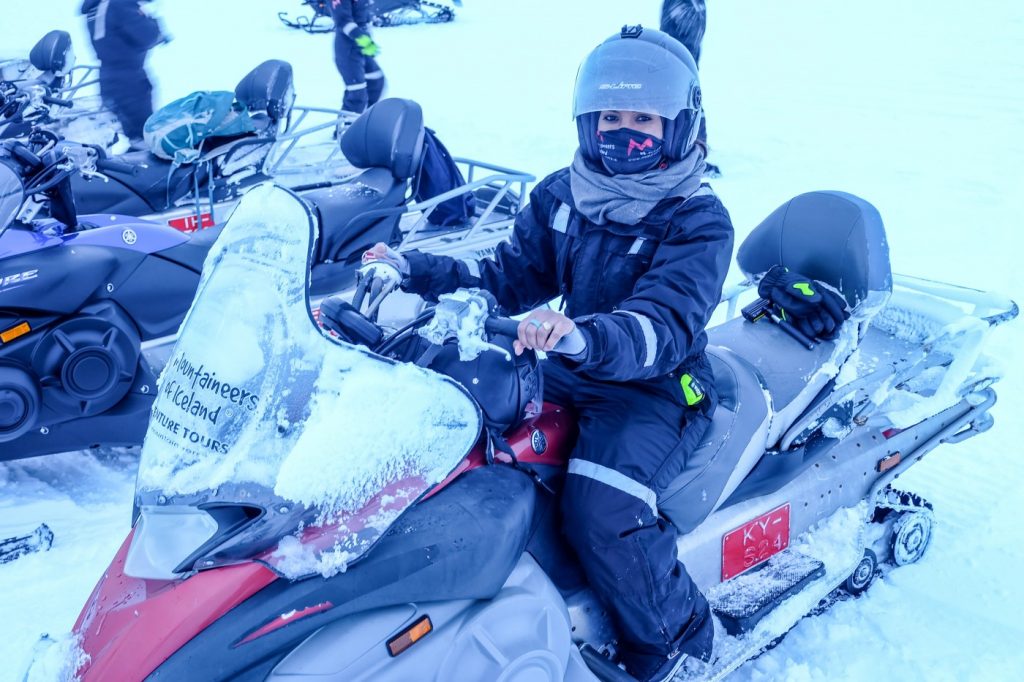 Our tour left from the Gullfoss parking lot and after an hour or so, we were in the middle of nowhere on the Langjökull glacier. I saw a blanket of white as far as the eye could see. It covered the small mountains and lay flat until the horizon. We suited up in snow suits and helmets, but it was so cold. My hands only warmed up when I was driving because of the heat of the handlebars. I watched the weather change from clear to snowy as we drove on the glacier into the white wilderness. It was an experience that’s fun even if you’ve never driven a snowmobile before. 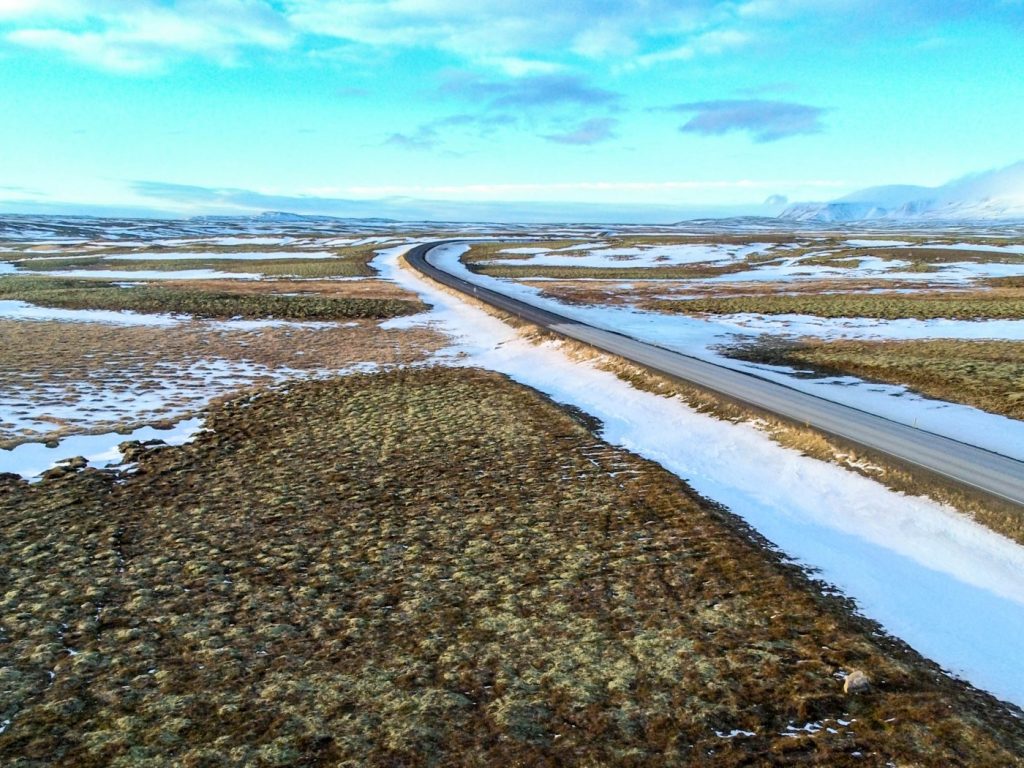 You’ll have the freedom to make as many stops and breaks along the Golden Circle drive if you rent a car. The highway has wide sections with small parking areas and picnic tables you can rest at and take in the views around Thingvallavatn Lake on the way. 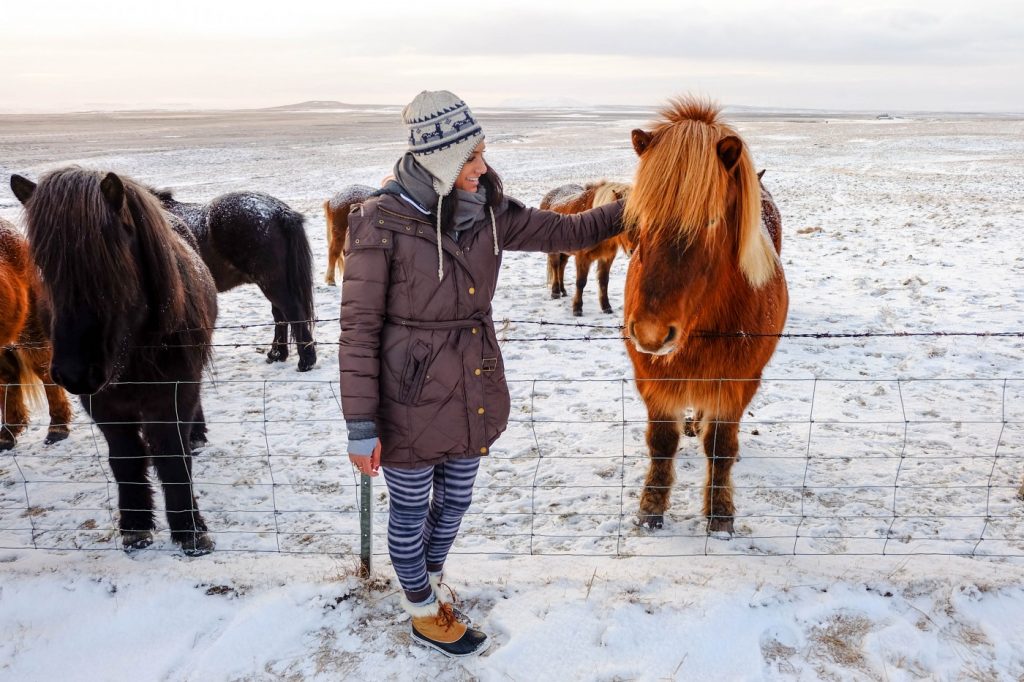 One of my favorite stops along the Golden Circle was an impromptu stop to pet Icelandic horses! These cute are so fascinating – they’re miniature in comparison to horses from other countries and they are so strong! I couldn’t believe these horses could withstand the extreme temperatures in winter. Icelandic horses are so revered in the country that the law prevents them from ever returning to Iceland after exportation. They also have great hair; I felt like I was hanging out with a couple of Icelandic model horses! They’re friendly and adorable and I so wanted to take one home with me.

I’ve been told that seeing these places is so different in summer. I’m so glad I braved the cold and explored the Golden Circle and other parts of Iceland in winter. I’d still love to go back and see Iceland in summer, but if you’re prepared for it, winter in Iceland is like stepping into another world!

Still on the fence about visiting Iceland? Here’s a glimpse of what my experience looked like!

What was your favorite part of the Golden Circle?